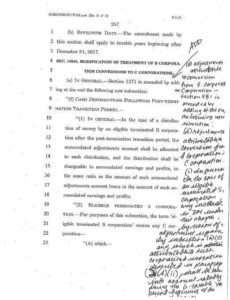 Congressional Republicans are rushing to complete a tax plan that is leakier than a Michael Flynn testimony.

Early Saturday morning, Senate Republicans rammed through a tax bill that was full of nearly-incomprehensible text scribbled in the margins. The rhetoric might have sounded good to GOP interest groups, but the result was legislation that, as written, is a veritable nightmare for Americans and their accountants. As Politico explains:

Republicans’ tax-rewrite plans are riddled with bugs, loopholes and other potential problems that could plague lawmakers long after their legislation is signed into law…

…Some provisions are so vaguely written they leave experts scratching their heads, like a proposal to begin taxing the investment earnings of rich private universities’ endowments. The legislation doesn’t explain what’s considered an endowment, and some colleges have more than 1,000 accounts. [Pols emphasis]

In many cases, Republicans are giving taxpayers little time to adjust to sometimes major changes in policy. An entirely new international tax regime, one experts are still trying to parse, would go into effect Jan. 1, only days after lawmakers hope to push the plan through Congress.

“The more you read, the more you go, ‘Holy crap, what’s this?’” said Greg Jenner, a former top tax official in George W. Bush’s Treasury Department. “We will be dealing with unintended consequences for months to come because the bill is moving too fast.” [Pols emphasis] 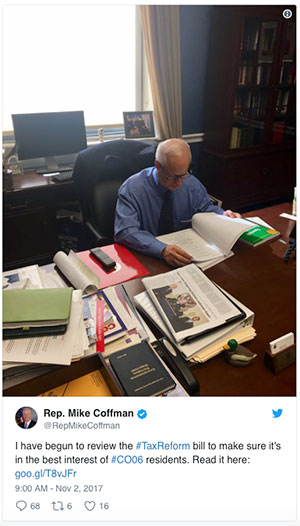 As NPR reports, the AMT problem alone is going to be hard to solve:

As with the individual AMT, the corporate AMT aims to keep large businesses from avoiding too much of their tax bills through deductions and credits.

Both the House and Senate must now agree on one piece of legislation before they can send the bill to President Trump, and there are some significant differences of opinion that could yet derail the whole thing. The New York Times breaks down some of the major disagreements, which include the alternative minimum tax (the House says cut it, but the Senate says no); what to do with numerous itemized deductions; how to deal with pass-through businesses; and a potential repeal of the so-called “Johnson amendment” (the House wants it repealed, but the Senate does not).

Republican rhetoric about their tax plan’s benefit to the economy is not holding up with actual business interests. Small business owners and the coal industry are among those that are terrified of the Republican tax plan. As CNN explains:

Coal CEO Robert Murray warns that if the Senate version of tax reform is enacted by President Trump he’ll be destroying thousands of coal mining jobs in the process.

“We won’t have enough cash flow to exist. It wipes us out,” Murray told CNNMoney in an interview on Tuesday.

Murray, a fierce supporter of Trump’s efforts to revive coal, condemned the Senate bill as a “mockery” that would inflict a devastating tax hike on beleaguered coal mining firms as well as other capital-intensive companies.

Let’s hurry up and finish this tax plan, they said.

What could go wrong?