The Republican Vacancy Circus in Pueblo

UPDATE: The Denver Post talks to Judy Reyher about her history of racist social media posts, and Reyher makes absolutely sure to clarify that she is definitely not being misunderstood:

A southeast Colorado Republican appointed this week to a vacant seat in the state legislature questions if former President Barack Obama was born in the U.S. and has criticized African Americans and Muslims on her Facebook page, actions that have garnered pushback from top state party officials.

Speaking to The Denver Post, Judy Reyher, of Swink, also said that “the black community and the Democrats are the most racist group of people that exist,” and that black people “hate white people with a passion.”

Reyher says nothing she has said about Obama has had anything to do with race — “I hated the black half of Obama as much as I hated the white half” — and that she doesn’t have blanket beliefs about any group of people. 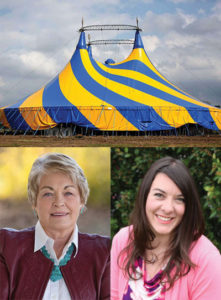 Step right up, ladies and gentlemen!

There’s a big controversy brewing in Pueblo, where Republicans in HD-47 may or may not have effectively filled the seat being vacated by state Rep. Clarice Navarro, who resigned earlier this month in order to take a full-time position in the Trump administration.

Delegates and Republicans from across House District 47 gathered in Fowler Monday night at the Blackburn Community Center to fill the vacancy established by the resignation of former State Representative Clarice Navarro. Two candidates were seeking the office, Tamra Axworthy of Pueblo and Judy Reyher of Swink. In a vote of 6-5, Judy Reyher came out as the night’s victor and will be finishing out Navarro’s term.

“It is with humble gratefulness that I step up to serve as your representative to the Colorado House to fill Clarice Navarro-Ratzlaff’s previously vacant HD47 seat,” said Reyher via her campaign website. “I hope to continue to serve you as well as her.”

According to a story today in the Pueblo Chieftain, the fantastically-named Tamra Axworthy seems to believe that she should be preparing to serve the final year of Navarro’s term:

Axworthy argues that she received six of the 11 votes cast by the committee members. She is asking the Colorado Republican Party to intervene in the disputed election.

Reyher is chairman of the vacancy committee, which included GOP top party officers from Pueblo, Fremont and Otero counties.

In an email to political reporters Tuesday, Axworthy said she had confirmation from six of the 11 voting members Monday evening that they supported her. [Pols emphasis]

The fact that Reyher chaired the vacancy committee that allegedly awarded her a narrow victory certainly adds to the suspicion here. Reyher is certainly no stranger to controversy, either; her social media accounts are littered with blatantly-racist screeds that she half-heartedly defended in a 2016 interview.

It is possible that the outcome of this vacancy challenge could have an impact on the makeup of the state legislature in 2019. Navarro had little trouble winning re-election in both 2014 and 2016, but when the seat was open in 2012, Navarro only defeated Democrat Chuck Rodosevich by about 3.5 points.