With Flake Out, Gardner’s Job Gets Even Harder

He continued, “The notion that one should stay silent as the norms and values that keep America strong are undermined and as the alliances and agreements that ensure the stability of the entire world are routinely threatened by the level of thought that goes into 140 characters — the notion that one should say and do nothing in the face of such mercurial behavior is ahistoric and, I believe, profoundly misguided.” 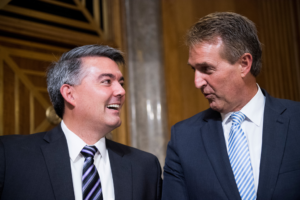 Politico reporting on the scathing words today from Sen. Jeff Flake, who announced he will not run for re-election next year as the GOP’s midterm turmoil deepens:

Embattled Sen. Jeff Flake (R-Ariz.) will retire after his current term expires, he announced on Tuesday in a decision that further roils a 2018 Senate landscape marked by multiple Republican retirements.

Flake was one of the most vulnerable Republican senators up for reelection next year. A vocal critic of President Donald Trump throughout and since the 2016 campaign, Flake said it became clear that that opposition would make it impossible for him to get through a Republican primary.

We’ll update with further coverage, but Flake is mincing no words on his way out:

Sen. Flake’s decision to not seek re-election came as his far-right primary challenger state Sen. Kelli Ward is pulling into a double-digit lead over Flake in polling for the 2018 Arizona Senate primary. Ward lost to Sen. John McCain in 2016’s GOP primary, but has been boosted this time around by vociferous support from Donald Trump.

Ward’s decision to host a public discussion on the “chemtrails” conspiracy theory in 2014 continues to dog her. She has maintained she never believed airplane contrails are spewing dangerous chemicals into the environment. But critics say her taxpayer-funded public meeting on the topic in Kingman pandered to anti-government conspiracy theorists and reflected poor judgment on her part.

Ward also has appeared on the radio show of conspiracy theorist Alex Jones. She visited Nevada in 2014 in support of rancher Cliven Bundy, who at the time was in a tense standoff with the U.S. Bureau of Land Management over grazing fees and cattle. And Ward tweeted messages backing disgraced NBA owner Donald Sterling’s right to make racist comments, even though she said she did not agree them.

Although this development may clarify the short-term primary issues for National Republican Senatorial Committee (NRSC) chairman Cory Gardner, the long-term problem is the need now to defend a far-right candidate in a competitive general election–like the problem Republicans face sooner in the Alabama special election with fringe-right candidate Roy Moore, but potentially much more serious in the long term due to Arizona being a more swingable state. For an analogy a little closer, this could turn out a lot like Ken Buck’s pyrrhic victory over Jane Norton in the 2010 GOP Senate primary.

At the very least, you can be assured Democrats will mount a major effort to stop Ward, based on both opportunity and general principles. And it’s quite possible that on Election Night 2018, Sen. Jeff Flake will be sorely missed by the chairman of the NRSC.