Head on over and take a look at the updated version of The Big Line.

There aren't a lot of changes at the top, but the races for Attorney General and Secretary of State look plenty different.

With the 2013 legislative session behind us, we've updated The Big Line with our latest projections. Of note: 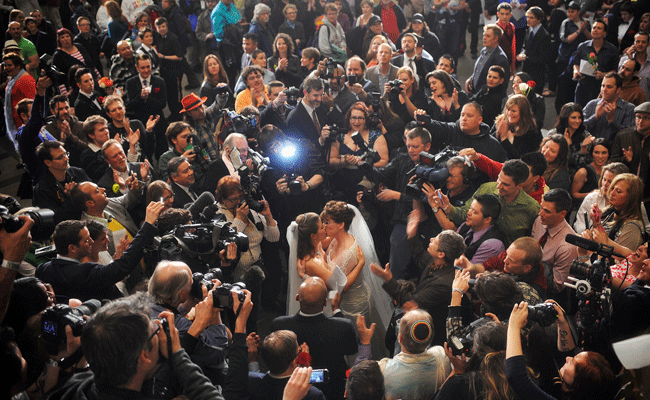 "The shot": Fran and Anna Simon kiss after their civil union ceremony. Photo by Evan Semon, Out Front Colorado

If you were part of last night's partying related to the first legal civil union ceremonies for LGBT couples in the state of Colorado, chances are you're not even awake yet (unless you haven't gone to bed). But here's a roundup of initial coverage on the first day of the Colorado Civil Union Act in effect.

Much more after the jump…

END_OF_DOCUMENT_TOKEN_TO_BE_REPLACED

The Q1 fundraising numbers are now available for all of Colorado's Congressional candidates. We've laid things out in a handy table format below, organized by total amount of cash on hand. Numbers in red indicate that the candidate spent more money in Q1 than he or she raised during the same period.

Conservatives across the nation are gleefully pouncing on another Colorado Democrat who said something stupid during the debate over guns. In clearer terms than previous incidents, this latest gaffe from Rep. Diana DeGette, as we'll explain, could be the worst one yet from any Democrat. Huffington Post reports as charitably as can be:

Rep. Diana DeGette (D-Colo.) is feeling the heat from gun advocates after offering a confusing argument for a federal ban on high-capacity magazines that she has twice sponsored.

Speaking at a Denver Post forum on gun control Tuesday, DeGette pushed for legislation that would prohibit the future sale of ammunition-loading devices that hold more than 10 bullets. Noting that Colorado had recently passed a ban on magazines capable of holding more than 15 rounds, DeGette suggested existing devices that are grandfathered into the laws would lose functionality after being used.

"I will tell you these are ammunition, they’re bullets, so the people who have those now they’re going to shoot them, so if you ban them in the future, the number of these high-capacity magazines is going to decrease dramatically over time because the bullets will have been shot and there won’t be any more available,” she said, according to the Denver Post.

Alright, so, we can start by agreeing that this is one of the dumbest things we have heard in the debate over gun safety legislation from either party at any level. As anyone who has ever handled (or even seen a photo of) a magazine-fed firearm in their lives knows, they are very much reusable, not at all like "ammunition" which is expended, and though it's true that the point of the magazine limit is to reduce the availability of these magazines over time, it's not because "the bullets will have been shot." If you have even the most casual understanding of the issue, and you did not cringe when Rep. DeGette uttered these nonsensical words, you weren't paying attention.

And we're sorry to tell you, folks: it gets even worse.