Editorial Department: If We Endorsed Mike Coffman in CD-6 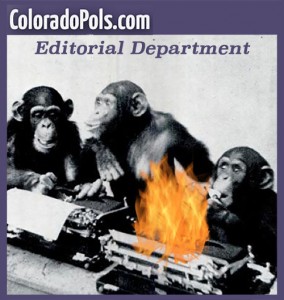 Welcome back to the Colorado   Pols’ Editorial Department, where we use letters to form words and occasionally words to form sentences.

After asking ourselves that question, we set out to answer it as well. Then we wrote stuff.

Click after the jump to see what it would look like if we endorsed Rep. Mike Coffman for Congress in CD-6…

Coffman for Congress Or Whatever

Two years ago the Denver Post asked Congressman Mike Coffman about why he had reversed his longstanding opposition to abortion in cases of rape and incest. In response, Coffman helpfully reminded the Post that his office had already addressed this issue in a press release buried on his congressional website a year earlier. Coffman suggested that the Post stop asking so many questions. We agree.

It’s that kind of forthrightness and independence that we’ve come to admire in Coffman. We don’t want to bother him further, and neither should you. Just do what we say and vote for Mike Coffman in CD-6.

Dysfunction has become the norm in Congress, but Coffman has cooperated with government shutdowns for only nine days at a time. He has hung on the sidelines as Congressional Republicans nearly defaulted on the U.S. debt and opposed budget compromises to keep the government funded. On the troubled VA hospital, we boldly assert that Republican leaders would have followed the same strategy of inaction had they not realized that Coffman’s re-election might be endangered.

Coffman has emerged as a leader in his party on immigration talking points. While his party’s standard-bearer Donald Trump has taken the path of mass deportation, Coffman has sought a more enlightened position of mouthing friendly words about reform while doing nothing that would embarrass his party leaders in Congress. Whenever we’ve sought clarification on what he actually stands for, Coffman has always reassured us that whatever we want to write is true and that he has a plane to catch.

Washington is full of people who refuse to compromise or even listen to their colleagues. Mike Coffman takes the rare step of not only listening, but also sometimes yelling, when he wants to make a point. We ask voters in the evenly divided Sixth Congressional District to find another elected official with the guts to tout Planned Parenthood’s support in his last campaign and then vote to defund them back in Washington. Some might call these actions manipulative, but we believe this kind of moral flexibility has served Coffman well whenever his political circumstances require him to say something different.

Voters should return Mike Coffman to Congress and rest assured that nothing will change.