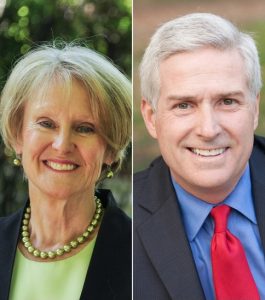 Beth McCann, left, appears to have changed her position on the death penalty to more closely resemble Michael Carrigan’s stance on the issue.

The race for the Democratic nomination for Denver District Attorney is one of the more interesting battles to watch in Colorado this Primary season. Three candidates — Michael Carrigan, Beth McCann, and Kenneth Boyd — are running to replace outgoing, term-limited Denver D.A. Mitch Morrissey.

The winner of the June 28th Democratic Primary in Democrat-heavy Denver will almost certainly go on to wrap up the job in the General Election, which is particularly enticing because the Denver D.A. can serve three terms, for a total of 12 years, without ever really needing to worry about re-election efforts again. The Democratic Primary has been a heated affair thus far and has emerged as the single most expensive Primary race in the state (not counting federal races). University of Colorado Regent and attorney Michael Carrigan has long been considered the odds-on favorite in this race, which may help explain why State Rep. Beth McCann is flipping her position on a pretty major issue.

On Sunday the Denver Post ran a long comparison piece on the race that includes several answers to specific policy questions. Here’s how McCann and Carrigan responded to the following question:” The death penalty is seldom used in Denver. What is your position on the death penalty and when — if at all — would you find it appropriate to seek that punishment?”

Carrigan will not seek the death penalty if elected.

“It’s inefficient, it’s expensive, it prolongs the process and is something that is not practiced in the industrialized world,” Carrigan said.

McCann will not seek the death penalty if elected.

“I would not bring it because I don’t believe in it,” McCann said. “I don’t think the state should be in the business of killing people.” [Pols emphasis]

I am personally opposed to the death penalty, and I voted in the legislature to repeal it. But it is the law, and as the DA, you are bound by the law. [Pols emphasis] So I suppose there might be an awful, horrific case where I might file, but it would have to be egregious.

By contrast, here’s Carrigan’s answer to the Law Week question:

I’m against the death penalty. It’s expensive and inefficient, and it’s not something that should continue. If I was elected DA, I would support a repeal.

In a February 2016 forum in House District 8, McCann expanded a little on her previous answer regarding the death penalty (skip ahead to about the 20 minute mark for McCann’s answer).

I am opposed to it. I need to make that very clear…Now, that said, we do have a victim’s rights act…I believe, in deference to people who have lost a child, lost a mother, lost a family member, in the most heinous of circumstances.

That if i’m the DA, I at least owe that family the right to sit down and talk to them. I’m not going to bring the death penalty — I’ll explain my thinking and reasoning to them…but I owe them that courtesy…

…And I wonder what other laws Mr. Carrigan would disregard? Because if he doesn’t like the law, then he is just not going to apply it? That is not what the oath is for the District Attorney. You take an oath to uphold the law. So I believe that I would have to respect that.” [Pols emphasis]

Okay, so McCann does not believe in the death penalty and would not seek the death penalty if elected District Attorney…but she would pretend to be open to the idea so that families could tell their side of the story (even though McCann already made up her mind).  McCann concludes her answer by criticizing Carrigan for “disregarding” laws — which she just said she would do herself — as a way of attacking Carrigan’s much simpler answer that he would not pursue the death penalty, period.