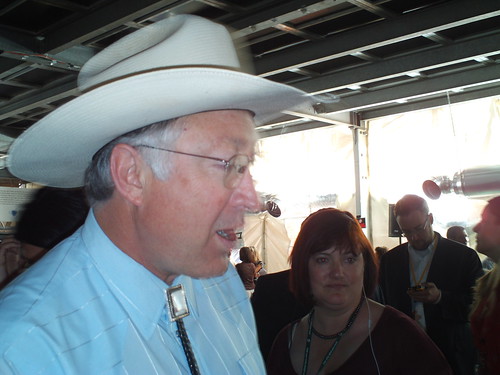 Senator Ken Salazar stopped by the Big Tent today. It was a welcome surprise to see some local politicians coming to get some face time with the bloggers (Ken Gordon stopped by too, but I wasn’t able to have a substantive interview with him.) It says a lot about the sway of new media that an incumbent Senator is already trying to get his name out with the national blogs. I told his assistant that I was with Pols, and he immediately jumped at the chance for an interview. I asked the Senator about the Convention, what it means for Colorado:

“It seems like it was just yesterday that I was on the phone with Howard Dean saying, ‘You have to bring it to the West, you have to bring it to Colorado.’ And as he worked on it, very hard really, for the last two and a half [years], it is finally here, and it is 100 times more wonderful and more thrilling than I thought it would be. So I’m very proud with what Denver has done.”

In addition, I asked the Senator to comment on how new media is affecting this election, and Colorado specifically:

“I think new media is essentially what has energized this election in 2008. I think new media has brought about the young people of America to be so engaged and involved and educated about their choices in this election. It is absolutely phenomenal. And I must admit that, coming from my own three statewide elections: Attorney General in 1998, 2002, and then US Senate in 2004-new media is new. It was not around in my ’98 or 2002 campaigns, it was coming in a little bit in 2004, but from ’04 to ’08 it has become absolutely phenomenal. So, it’s very, very important, and it’s going to have a dramatic impact on the outcome of these elections.”

Out of curiosity, I couldn’t resist asking him about John McCain’s comments about renegotiating the Western States water compact:

“I think he didn’t quite know what he was saying-that he was poking a hornet’s nest in here in Colorado. Because Democrats, Republicans, and independents alike know that we’re the mother of rivers-most of the rivers in the West start here in Colorado. And when you start messing with our water, you’re messing with our livelihood, and it’s something that the people of Colorado will not stand for.”