Sorry, Colorado GOP, But You Do Not Have a Mandate 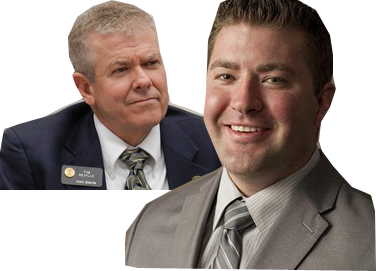 The Neville Nutters: Sen. Tim Neville (left) and his son, Rep. Pat Neville, just like to say no to stuff.

Readers of Colorado Pols probably know this already, but it's worth repeating because Republican legislators seem to think that voters gave them a mandate to go full-on crazy pants this year (relax, Dr. Chaps, we're not talking about that kind of "man date"). It's not just the anti-abortion "Personhood-ish" bills that might have you scratching your head; take a look at some of the other pieces of legislation that Republicans are introducing in Colorado. We'll forgive you for thinking this was 2001 — when Republicans basically owned the State Capitol — instead of 2015:

– SB15-032: Majority Caucus Chair Vicki Marble does the bidding the of the RMGO with legislation that would allow Coloradans to carry concealed weapons without a permit.

– SB15-044: Lundberg and Senate President Bill Cadman are among the Republicans sponsors of a bill to cut back renewable energy mandates in Colorado.

– SB15-018: The Neville Nutters (Sen. Tim Neville and his son, Rep. Pat Neville) want to repeal the Late Vehicle Registration Fee. There's no actual plan here for how to pay for road and bridge construction and maintenance. This is a very simple "No" bill that seeks only to repeal something.

– HB15-1037: Rep. Kevin Priola and The Neville Nutters sponsor what we'll call "The RIght to Discriminate Act", which allows you to freely exclude people so long as you claim that it is based on your religious beliefs.

All of this is just the beginning — the tip of the ever-melting iceberg — from Republican legislators who apparently believe that Colorado voters told them in 2014 that they had a mandate to "Just Say No" to pretty much everything. We haven't seen a collection of legislation that is this far-right since…well, we can't even remember the last time (and Colorado Pols has been around for 10 years).

Look, we get that we are living in a time in America where partisanship has never been more, uh, partisan, but this is pretty freakin' far from anything even resembling the general interests of Colorado voters. You could argue that Republicans are just "being Republicans" and trying to stick to some sort of manufactured set of ideals that they think got them elected, but this is the kind of thing that you usually see only when one side either has a clear majority or is so far in the minority that it doesn't matter if they draw up their legislation with crayons. This is a very risky strategy when you only control one chamber of the legislature — and even then by only one seat.

Perhaps this shouldn't be a surprise, however. This is on the front page of Rep. Pat Neville's campaign website, where he declares that the HD-45 Representative should be a "CONSERVATIVE STALWART" (he put it in all caps, too):

From PatrickForColorado.com, the campaign site of Rep. Pat Neville.