GOP Hopes for State House Fade Under Wave of Ineptitude

“I don’t believe in coincidences.”

Any good fictional detective will usually mutter a similar phrase at some point in a story. The phrase usually means that if two or more occurrences seem like a coincidence, it’s probably connected in some way…and, yada, yada, yada…Scooby Doo and the gang foil another plot by criminals dressed in elaborate costumes.

What does this have to do with Colorado politics, you ask? Well, here at Colorado Pols, we are always skeptical of coincidences (and not just when it comes to talking dogs). And in recent months, the manner in which Republicans have stumbled across many of their nominees for State House seats has raised our collective eyebrows. Republican candidate recruitment (and the lack thereof) has been so comically inept that its problems can’t just be dismissed as coincidence.

Do Republicans believe there is some strategic advantage in waiting until the last possible minute to finalize candidates? Or are really they just ludicrously disorganized and discombobulated as they ponder how they can win control of the House in 2014? We’re inclined to go with the latter explanation; there is no way someone could have actually thought this up on purpose. 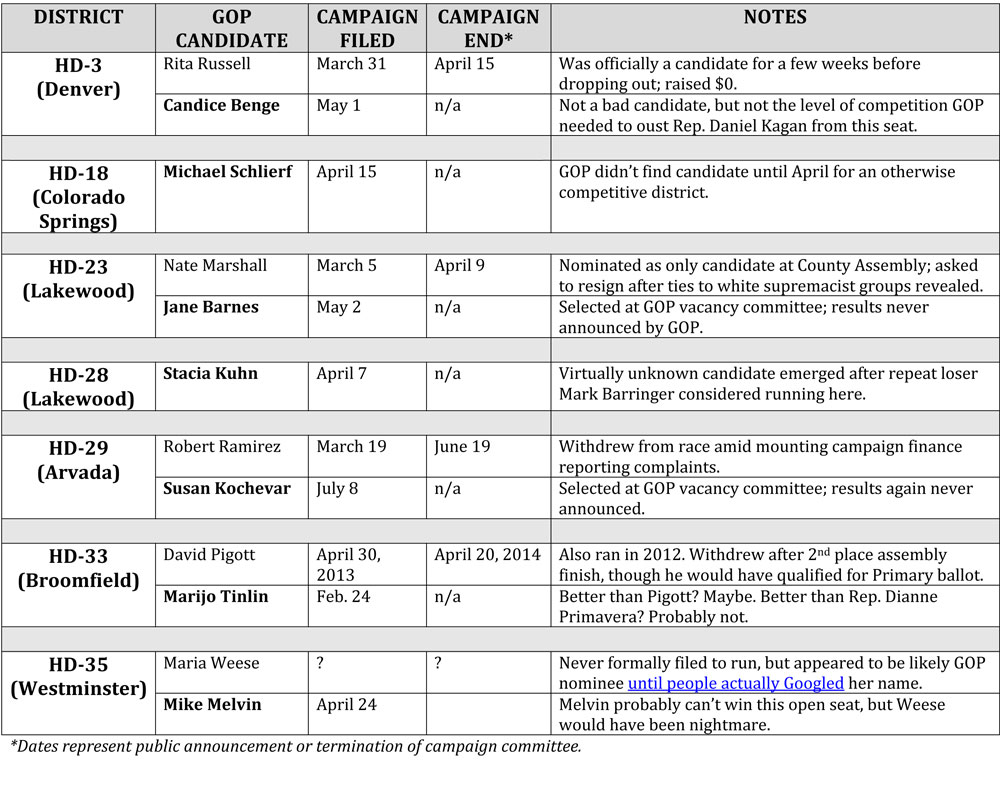 There are 65 House Seats on the ballot every two years, but only a fraction of those seats are really “winnable” in any given year. In 2014, Republicans could gain control of the House with a net gain of 5 seats, though the odds of this happening are beginning to seem as likely as Dudley Brown officiating a same-sex marriage ceremony. Republicans have a host of problems related to their State House campaigns, the most glaring of which is also the most important: Finding strong candidates to run.

In the last 6-8 weeks, Republicans have been playing a weird game of musical chairs in 5 House Districts (HD3, HD23, HD28, HD29, HD35), changing out one bad candidate for another or secretly quietly filling vacancies without bothering to send out so much as a press release to the media. In several other districts, Republicans have fielded last-minute candidates with little name recognition in their respective districts.

Nature abhors a vacuum, and politics is no different. With no competition for the Republican nomination in many House seats, solitary candidates arose like the walking dead, dragging minor connections with Tea Party and gun rights groups (including RMGO) behind them. Perhaps Republican House leadership, piloted by Reps. Libby Szabo and Brian DelGrosso, had given up on trying to recruit decent candidates for several competitive races. But somebody still needed to fill those seats, and as the GOP quickly learned, there’s no telling who might emerge through the caucus process. As it turned out, many of the GOP nominees for competitive House seats were so unfathomably terrible that Republicans had to scramble to replace them to prevent outright disaster that could doom the entire Republican ballot.

So how did we get here? The landscape for Republicans in 2014 has been markedly different from the 2012 election cycle, and the fallout from a disappointing election two years ago is partly to blame for GOP struggles this year. In 2012, Republicans recruited fairly strong candidates overall and outspent Democrats by a 2-1 margin (including both soft and hard money) in hopes of expanding on their one-seat majority in the House. But Democrats ran solid House campaigns with strong candidates who excelled at both fundraising and grassroots outreach; when all the votes were counted, Democrats picked up 5 seats to give them a new 37-28 majority.

The demoralizing results of 2012 gave way to new Republican House leadership, but Szabo and DelGrosso have struggled to date in managing the broad strategy for retaking the House. There is little margin for error when trying to capture the majority in a state where only a handful of the 65 House seats are truly competitive districts, yet Republicans were having trouble uncovering live human beings willing to put their name on the ballot. When candidates arose anyway, the GOP had a new problem on its hands. 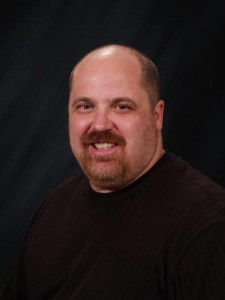 Consider HD-23, where Nate Marshall was nominated at the county assembly by virtue of being the only Republican interested in running for the seat. Marshall may have seemed like a nice-enough guy when he raised his hand at the county assembly in March, which was enough to grant him the Republican nomination; but a cursory online search quickly revealed that Marshall was a convicted felon with ties to white supremacist groups. Whoops!

Republicans quickly called on Marshall to resign as the GOP nominee, but they didn’t finally hold a vacancy committee until nearly one month later. They eventually settled on Jane Barnes, a former member of the Jefferson County School Board, as their nominee in HD-23…and then they didn’t bother to tell anyone. In fact, Colorado Pols broke the news of Barnes’ candidacy, nearly two weeks after a vacancy committee made the selection. You would think Republicans would have been a bit more anxious to put Nate Marshall in their rearview mirror.

We might have been inclined to consider this a random event that unfolded under a strange set of circumstances…except that it keeps happening. In late June, former HD-29 Rep. Robert Ramirez ended his campaign after failing to file numerous campaign finance reports. Republicans in HD-29 again called a vacancy committee – and again, nobody seemed to know about it – and just last week it was finally reported that Susan Kochevar had been chosen to replace Ramirez.

Republicans have managed to avoid problematic candidates before they were formally nominated, as they did in HD-35 in selecting Mike Melvin instead of Maria Weese (though Melvin may only be slightly better). As you can see from the chart above, Republicans have had trouble with recruiting candidates in at least 7 competitive House Districts, severely hampering their chances of winning control of the State House. But now that they have their candidates in place (theoretically, anyway), can Republicans pull together the resources in win in 2014? As we’ll examine in Part 2 of our look at the State House races to watch, raising money has been just as difficult as finding candidates.