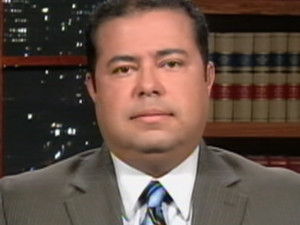 Ortiz argued that in order to provide better access, voters should be able to get a no-excuses absentee ballot to vote in the recall election, they could provide a yellow voter postcard as ID at the polls to process voters faster and overturn language that would have required military and students to meet a stricter residency ruling than other voters. Denver District Judge Robert McGahey ruled in Ortiz’s favor on all counts.

“Today is a good day for voters. This will free up access to the polls for voters, apply fair rules on residency requirements to vote and cut down on lines through September 10,” said Ortiz.

The favorable rulings, turning back arguments from GOP Secretary of State Scott Gessler, mean that early voting in Pueblo will begin tomorrow, continue on Labor Day and all of next week, and–this marking a major development from the prior status quo–absentee ballots may be requested by all voters through September 3rd. FOX 31's Eli Stokols has the reaction from Gessler:

Secretary of State Scott Gessler’s office told FOX31 it has no problem with Ortiz’s decision to open early voting centers.

But Gessler was disappointed in Judge Robert McGahey’s rulings Thursday morning throwing out his proposed rules for the recall: one which requires limited access for mail ballots; and another that would have required voters to declare their intent to make the address on their voter registration form their permanent address to prevent so-called gypsy voters.

Gessler may not like it, but Judge Robert McGahey was unequivocal that the rule imposed by Gessler to deal with the chimeral issue of so-called "gypsy voters" was beyond his authority. Much more sinister in our opinion is Gessler's objection to absentee ballots being available on a "no excuses" basis.  El Paso County, where the other recall election is taking place, can't print ballots until a challenge from the Libertarian candidate to the insufficiency ruling on her petitions is resolved. But if Pueblo is able to proceed, there's no good reason why they shouldn't be allowed to deliver a mail ballot to anybody who asks for one. There's no "uniformity" at risk with entirely separate recall elections that just happen to be on the same date.

And again, as good county clerks know, these questions should always be resolved by making voting work.