What Does Voter Turnout Tell Us About November? Not Much 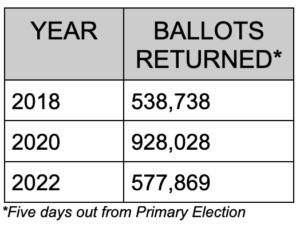 Political pundits often attempt to connect voter turnout numbers in a Primary Election as some sort of harbinger of things to come in a General Election. Most of the time there is little correlation between the two elections, and that is particularly true in 2022.

The Colorado Secretary of State’s office released ballot return numbers on Friday indicating that Republican ballots are being returned in larger numbers than Democratic ballots. Should this trend continue through Tuesday evening, we’d expect some in the GOP to attempt to spin a narrative that Colorado Republicans are more enthusiastic about voting in 2022 than Democrats. There are two very significant problems with this story, however:

First off, the 2022 Primary Election in Colorado is very different than in years past. Republicans have contested races in three of the five major statewide races (U.S. Senate, Governor, Secretary of State) and in four Congressional districts (CO-03, CO-05, CO-07, and CO-08). Democrats, meanwhile, have NO contested statewide races and a competitive Primary in only one Congressional district (CO-03). For many Democratic voters, there are no races on their ballots for which a choice is even available. There’s little incentive for Democrats to even bother submitting ballots when there is nothing to be decided.

This year’s preliminary ballot-return data shows that unaffiliated voters are largely responsible for the GOP’s turnout edge so far. Nearly 30% of the Republican primary ballots returned as of June 24 were cast by voters not affiliated with any party — double the number reported at the same point prior to the state’s previous midterm primary election in 2018. [Pols emphasis] Colorado law allows the state’s 1.7 million unaffiliated voters — a larger group than either its 1.1 million active registered Democrats or its 956,904 registered Republicans — to vote in either party’s primary election in a given year, but not both.

In other words, more voters are casting Republican ballots in the Primary Election — but that’s not an indication that Republican voters are more enthusiastic about participating in this year’s elections.

Primary Election turnout is generally not all that indicative of what might happen in November anyway, but this is particularly true in 2022. To borrow a quote often attributed to Sigmund Freud, “sometimes a cigar is just a cigar.”