How do you prove that Romney’s mistreatment of his Irish Setter was abusive? 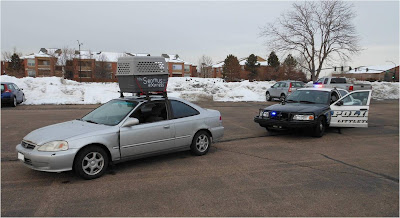 You could try demonstrating the same transport method with a toy dog, as one Littleton, Colorado protester did. The result: Littleton police stopped his vehicle on suspicion of animal abuse. According to Dogs Against Romney, the protester goes by “Oredigger” (do we have one of those registered on COPols?) and was on his way to protest a Romney campaign event when police stopped him, thinking that the toy dog crated on his car’s roof was a live pet.

After the jump, learn how you and your dogs can remind voters that Mitt Romney is no friend to pet owners (without getting pulled over).

Disapprove of Mitt Romney’s nostalgic recounting of his terrified dog’s defecation after riding crated on the roof of Romney’s car? Here’s what you can do to help dog lovers around the world keep this story alive.

1. Refresh your memory regarding the facts of the story. The one-sentence version: During a family vacation, Mitt Romney transported his Irish Setter, Seamus, on the roof of the family’s vehicle, confined to a crate; this caused the anxious, frightened dog to squirt liquid diarrhea out of his crate, which Romney rinsed away with a hose at a gas station.

3. If you have a dog who you transport humanely, consider displaying an “I Ride Inside” magnet or sticker on the bumper of your car. Several breeds are available, with more coming soon.

Why should this story matter?

In practical terms, it doesn’t. The only witnesses are Romney family members. The “victim” has long since crossed over to a place where dogs are, presumably, never crated at all, much less atop cars. Romney was not charged with a crime, and as far as we know, none of his policy proposals involve encouraging animal abuse.

However, the probable GOP nominee is something of an enigma on a personal level, a perception shared even by journalists covering the race. He tries mightily to be a “regular guy” and “one of us,” but we hear nothing but flub after flub when Romney’s actually confronted, one-on-one, with a regular guy or gal. It seems to be very difficult for Romney to empathize with others, whether human or animal. If there’s a single personality trait that’s important in a President, I’d say it’s empathy. The ability to put oneself in another person’s shoes and “see both sides” of an issue is critical for the POTUS, whether he’s suggesting Social Security fixes or deciding whether or not to bomb another country.

There’s also a legitimate concern about animal welfare raised by Mitt’s past mistreatment of his own pet. The next President may well be asked to sign legislation restricting the operations of “puppy mills.” He’s also likely to be asked to address animal issues including horse slaughter, sale of animal fighting paraphernelia online, and the management of BLM-owned Mustang horses. If Mitt fundamentally is unable to relate to the terror experienced by his own dog, rattling around on top of his car in the wind for hours, will he relate to the abuse and neglect experienced by puppies bred in a “mill” environment? Or the wealthy, $10,000 bet-making financier be more empathetic toward puppy mill operators, who cut animal care costs to maximize their own profits?

The bottom line: I can relate to those who look at the Seamus story as exemplary of partisan silliness and nitpicking, but, as a dog-lover, I also can’t ignore its relevance when considered alongside other incidents in which Mitt has demonstrated a fundamental lack of compassion. As a progressive, I believe in President Obama’s philosophy: Each of us is his brother’s keeper. Romney, unfortunately, wasn’t even effective or kind when serving as his own dog’s keeper.