Both UFCW's Kim Cordova and King Soopers President Joe Kelley told me that the strike was having an impact on contract negotiations. That's an undeniable victory for UFCW Local 7, which didn't have to stay out for all the originally-announced three weeks. https://t.co/KTfgZBG3Ix 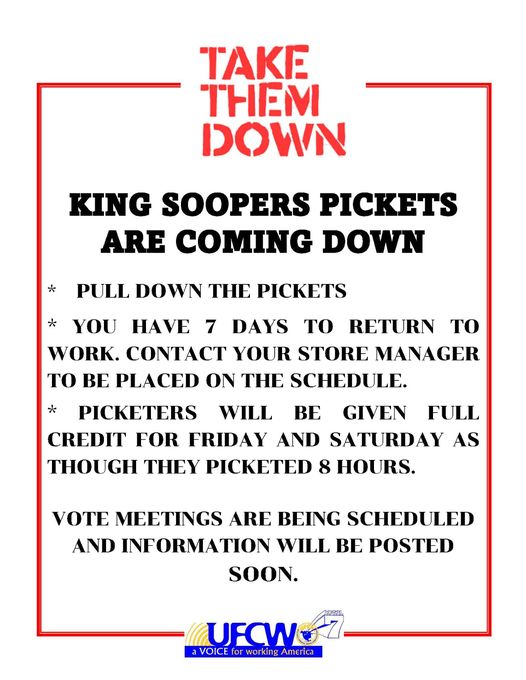 9NEWS reports on an apparently victorious conclusion to the 9-day strike by King Soopers workers, with a new (but yet to be disclosed) tentative agreement that workers will vote to approve Monday:

The worker’s strike will end immediately and workers can return to work Friday, UFCW said in a release.

“After months of negotiations and after our members walked out on strike, we have reached a tentative agreement with King Soopers/City Market that addresses the Company’s unfair labor practices and ensures that our members will receive the respect, pay, and protection they warrant,” said Kim Cordova, President of UFCW Local 7. “This fight will always be about the workers. I could not be prouder of our members who put it all on the line to have their voices heard.”

“We are pleased that this agreement allows us to put more money in our associates’ paychecks and secures healthcare and pension plans.” said Joe Kelley, president of King Soopers and City Market. “We look forward to welcoming back our associates and customers.”

By all accounts the shopping public also played a big role in the success of UFCW’s industrial action, largely honoring the picket lines and severely reducing traffic to King Soopers stores during the strike. Community support is every bit as important as strike pay in empowering workers to stay strong against management in a labor dispute.

Congratulations, and resume consuming as usual.