McKean Tries (and Fails) to Explain Away Rape Remarks 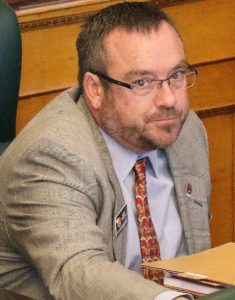 As we noted in this space earlier in the week, House Minority Leader Hugh McKean (R-Loveland) used some rather disgusting language in trashing Democratic legislative priorities in a pre-session right wing radio interview. In discussing his opposition to Democratic support for increasing fees to fund transportation projects, McKean said that Democrats “have been just raping the people of Colorado.”

McKean’s comments rightfully angered many Democrats, including State Sen. Faith Winter and State Rep. Matt Gray, the latter of whom pointedly walked out of the House chambers on Wednesday during McKean’s opening day speech.

As The Colorado Sun reports in its “Unaffiliated” newsletter, McKean is now trying to explain why it’s no big deal that he used rape language in off-the-cuff remarks:

“I meant that the people of Colorado feel like money is being taken out of their pockets,” said McKean, calling his usage of rape language merely a “misunderstanding.” McKean then pivoted to one of the weakest arguments you can use in any framework — from lazy term papers to shoddy opinion pieces: Quoting from a dictionary.

“There are three definitions,” McKean said of the word “raping.” “The last definition means to be robbed. That is literally Webster’s definition for that word. [Pols emphasis] I wish that things didn’t get political quickly.”

When asked if he may use different language in the future given the other definitions of “raping,” McKean said “yeah, I might use better words.”

“When we’re in the middle of these interviews, there are times when I would much rather use better words that don’t lead to that kind of misunderstanding,” he said.

First of all, there was no “misunderstanding” from McKean’s words. It was because McKean’s comments were perfectly understood that there was such a pushback to his rhetoric.

As to the other part of his excuse…yes, friends, many words do in fact have multiple meanings. “Bananas” could be a euphemism for someone (or thing) that appears to be crazy; it could also refer to a collection of yellow fruits that grow on trees.

There are some words that also are only ever used in one particular frame, and “rape” is absolutely on that list. When was the last time you had a conversation with someone who used the word “rape” to discuss a robbery? We’d guess the answer would be, “Never.”

To use another example, via Merriam-Webster, the word “pig” could refer to a tasty domestic animal; a dirty, gluttonous, or repulsive person; an immoral woman; a police officer; or “a crude casting of metal (such as iron).” If you called someone a “pig,” you could technically say that you were calling them a “crude casting of metal” rather than a “repulsive person,” but no functional human being would accept that excuse instead of an apology.

McKean notably didn’t apologize for saying that Democrats were “raping” Coloradans, in part because the right-wing base loves this kind of incendiary rhetoric and McKean is desperate to firm up his bonafides with extremists. In fact, McKean isn’t responding to this because he thinks he made a mistake — it’s because he keeps getting pestered about it by colleagues and reporters.

Unfortunately, McKean’s response is an insult to the intelligence of everyone who hears it.