Get More Smarter on Friday (Dec. 3) 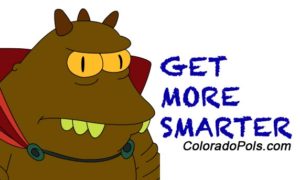 December 3 has generally not been that interesting of a day in modern history. Let’s Get More Smarter. If you think we missed something important, please include the link in the comments below (here’s a good example). If you are more of an audio learner, check out The Get More Smarter Podcast. And don’t forget to find us on Facebook and Twitter.

► As The Washington Post reports, some Congressional Democrats are pushing for action to be taken against Rep. Lauren “Q*Bert” Boebert for her anti-Muslim comments in recent weeks:

Five House Democratic caucus chairs, along with 36 other members of the Progressive Caucus, are calling for Rep. Lauren Boebert (R-Colo.) to be stripped of her committee assignments, citing her repeated “anti-Muslim” attacks against Rep. Ilhan Omar (D-Minn.).

“There must be consequences for vicious workplace harassment and abuse that creates an environment so unsafe for colleagues and staff that it invites death threats against them,” the Democratic chairs wrote in a letter, alluding to threats Omar has received after the attacks by Boebert.

“There must be consequences when Members of Congress demonize an entire religion and promote hate from their positions of public trust,” they wrote.

Congressional Republican leaders, meanwhile, are much more concerned about internal caucus relationships than racist comments from members. From a separate story in The Washington Post:

House Republicans have decried the public feuding this week among a small group of GOP lawmakers as detrimental to the party’s ability to win back the House in the 2022 midterm elections because it distracts from their attacks on Democrats’ agenda.

But little has been said publicly by party leaders or rank-and-file members about whether they find the source of this feuding problematic: Islamophobic attacks by some Republicans against a Democratic congresswoman who is Muslim.

The party’s focus on the political ramifications of the infighting rather than the substance of the disagreement has led civil rights groups and Democrats to charge that Republicans are embracing, or at least enabling, bigotry.

“The GOP has made it very clear that they are not condemning this bigotry, this violent rhetoric, and in fact they are allowing this to become the political foundation to raise more money and to get more clout — and if there is any remaining traditional moral leadership within the GOP, I’m asking where it is,” said Nihad Awad, executive director of the Council on American-Islamic Relations (CAIR).

As The Denver Post reports, some Republican supporters of Boebert are falling back on the trope that “there’s no such thing as bad publicity.”

► Meanwhile, Boebert is facing a different problem that has serious legal implications. As Ernest Luning reports for the publication formerly known as the Colorado Statesman:

A comedy writer and documentary filmmaker is asking federal and state authorities to investigate U.S. Rep. Lauren Boebert, accusing the Silt Republican of abusing her position to squelch a political critic.

In letters delivered in late October to the acting U.S. attorney for Colorado and Colorado Attorney General Phil Weiser, Toby Morton, a Tulsa, Oklahoma, resident, said he wants them to determine whether Boebert improperly used a congressional staffer and the assistance of law enforcement officials in an attempt to shut down a satirical website he maintains and discourage him from producing a film about the freshman lawmaker…

…Morton’s complaints focus on what he described as a threatening email allegedly sent to him in May by Boebert’s press secretary and an encounter in July between Boebert and Morton’s cameraman outside Shooters Grill, the restaurant she owns in Rifle, that culminated in a social media account linked to Boebert posting an image of the cameraman’s license plate and name.

A Boebert spokesman didn’t immediately respond to a request for comment.

► The Omicron variant of COVID-19 has been detected in Colorado. As Colorado Public Radio notes, experts still aren’t clear on risks of Omicron compared to other variants.

Eastman, meanwhile, has asserted his right to avoid self-incrimination by invoking the Fifth Amendment in response to a Congressional subpoena.

► Congressman Joe Neguse (D-Boulderish) is calling on the Senate to maintain immigration reform measures included in the Build Back Better plan approved last month by the House of Representatives.

► Marshall Zelinger of 9News reports on the roadblocks still ahead as Colorado tries to increase the number of electric vehicles on the roads. One of those roadblocks is in the form of a local HOA.

► The Colorado Sun reports on this week’s crazypants rally in Grand Junction in support of Mesa County Clerk and Recorder Tina Peters and her band of lunatics.

► The Denver Post looks at how area businesses are handling mask and vaccine requirements for customers.

► Colorado is in desperate need of moisture, as CBS4 Denver reports:

The weekly U.S. Drought Monitor report released Thursday morning showed drought conditions continue to expand in Colorado. One of the biggest changes from the report last week was an upgrade from severe to extreme drought across much of metro Denver, the Front Range and the northeast plains.

Pockets of extreme drought are also being detected in the San Luis Valley, on the extreme southeast plains of Baca County and on portions of the western slope. The entire state of Colorado is currently in some stage of drought.

Weather forecasters are hopeful that Colorado will get its first significant snowfall of the season sometime early next week.

► Colorado Newsline has the latest on discussions about protecting (or not) the woofs.

► A newly-elected city council member in Pueblo may have to fight to keep his seat amid legal troubles.

► Neil Irwin of The New York Times discusses why the latest economic report is more positive than you might think:

Everything in the November jobs numbers Friday was good except for the number that usually gets the most attention.

The 210,000 jobs that U.S. employers added last month was far below analyst expectations. But most of the other evidence in the report points to a job market that is humming. An open question a few months ago — is this a tight labor market or a loose one? — is quickly being settled in favor of “tight.”…

…A tight job market — one in which workers are scarce and employers have to compete to attract workers — is generally the goal of economic policy. Compensation tends to rise, and workers are confident in their ability to find a new job. The new numbers are just the latest evidence that this is the world American workers are living in right now. (Among the other evidence: The rate of people voluntarily quitting their jobs is at record levels.)

► Alabama Republicans appear to be bucking the endorsement of former President Donald Trump in the 2022 Senate race.

► The parents of the suspected shooter in this week’s school shooting in Michigan have been charged with four counts of involuntary manslaughter.

Since we’re on the subject of people who shouldn’t be taken seriously, Congressman Ken Buck (R-Greeley) has a totally normal take on the World Health Organization:

► This is why you shouldn’t take medical advice from Republican activists.

► As he well should, Dr. Robert Fauci is objecting to Fox News’ Lara Logan for comparing him to infamous Nazi war criminal Josef Mengele.

► Democrat Cole Finegan was sworn-in as U.S. Attorney for Colorado on Wednesday.

► There was a time when Colorado Republicans still demonstrated something of a conscience.

► This week on The Get More Smarter Podcast, hosts Jason Bane and Ian Silverii talk with Charles Ashby of The Grand Junction Daily Sentinel about Tina Peters, Lauren Boebert, and other weird happenings on the Western Slope.