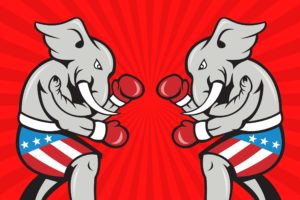 No matter what side they’re on in their internal war over whether to dump open primaries, Republicans are telling the world — and each other — how weak they are in Colorado, how much swing voters hate them, how deep blue the state is turning, and how depressed they are about it.

That’s the most amusing collateral damage for Republicans in the lead-up to Saturday’s vote on the open-primary question. And they are inflicting it on themselves.

In a devastating opinion posted today, Republican Mark Hillman expertly outlines the irrefutable math on how much unaffiliated voters, who are essential in winning elections, dislike Republicans nowadays.

“Even in GOP strongholds of Douglas and El Paso counties, unaffiliated voters are breaking hard against Republicans,” wrote Hillman, repeatedly using the phrase “deep hole” to describe the Republicans’ whereabouts in Colorado.

George Bruachler, a former candidate for Colorado Attorney General, was more circumspect about spotlighting his party’s ongoing failures in Colorado, but he did so nonetheless. “The notion that Republicans’ lack of electoral success since 2018 in Colorado is attributable to open primaries and all of the conspiracy theories that flow from them is contrary to facts.”

The Independent Institute’s Jon Caldara makes a habit of saying how clueless and bumbling Colorado Republicans are, and the upcoming vote gave him yet another opening.

“This would be the biggest gift yet (and there have been many) Colorado Republicans have given the progressive Democratic machine,” wrote Caldara.

State Rep. Dave Williams (R-Colorado Springs) and his allies like to argue that the choice is either to opt-out of primaries or “keep losing.”

“Do you want Republicans to keep losing elections in Colorado as corrupt Democrats do everything in their power to tip the scales against voters?” he wrote, adding in another opinion that “we must change course and stop counting on the failed open primary to somehow gain Colorado Republicans success that will never come.”

And, for different reasons, the same sense of pessimism was echoed by Republican strategist Dick Wadhams, who used the upcoming open primary vote to spotlight the Republicans’ never-ending fight against conspiracy kooks:

Democrats don’t mind Wadhams saying that Republicans are an endless parade of conspiracy, and they love hearing Republicans say they are past and future losers.

For Republican donors and activists, on the other hand, that’s the kind of talk that sends them searching for the exits.