Scott Gessler: Most “Forgiving” Secretary of State Ever

UPDATE: Fort Collins Coloradoan now up with a good story, with this quote from political science professor John Straayer of Colorado State University:

“This just doesn’t seem like the best exercise in judgment. One would think the secretary would instead go to great lengths to keep his distance so as to avoid any appearance of partisanship with respect to the fine reduction.”

Not so much it turns out! Meanwhile,

“The Larimer County Republicans are angry and frustrated having to pay the largest fine ever imposed in our office’s history. This is a way for them to relieve those frustrations,” Coolidge said.

“Frustrating” for who, again? Everyone else who obeyed the law?

We talked a couple of weeks ago about the decision by Secretary of State Scott Gessler to dramatically lower the fines owed by the Larimer County Republican Party–in the wake of years of failure to file required reports, as well as the resignation and criminal prosecution of former chairman Larry Carillo. Gessler was roundly criticized by editorial boards in Denver and Fort Collins, the Coloradoan writing, “Secretary of State Scott Gessler’s forgiving approach when it comes to campaign finance fines is harmful to the public process surrounding elected officials.”

According to this invitation we just got, Gessler’s approach is a little more than “forgiving.” 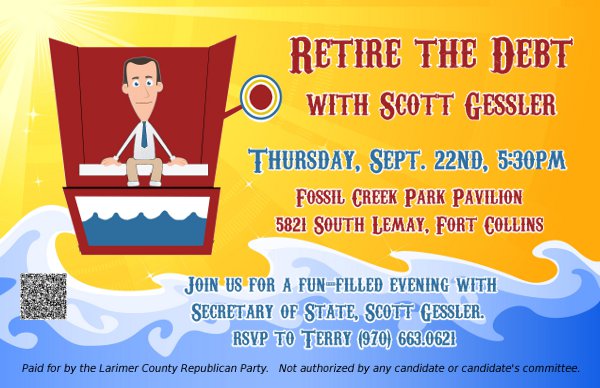 Not a joke–Secretary of State Scott Gessler, after acting in his official capacity to slash the fines owed by the Larimer County Republican Party from almost $50,000 to under $16,000, will host a “Retire the Debt” fundraiser in two weeks for the same Larimer County Republican Party. We have no doubt that it’s all technically legal, if only because nobody ever contemplated a Secretary of State doing something so spectacularly, magnificently, in-your-face stupid.

Like a judge reducing the defendant’s bail, and then posting it?