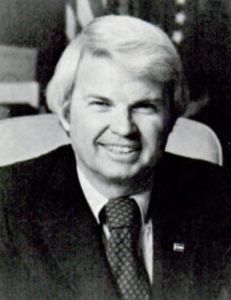 Undated photo of Dick Lamm during his time as Governor of Colorado.

Lamm would have turned 86 next week, but was surrounded by friends and family when he died of complications from a pulmonary embolism, according to wife Dottie Lamm. He had two children.

The former Democratic governor served three terms from 1975 to 1987, the longest in the state’s history, according to the National Governors Association. He also was a state representative from 1966 to 1974.

Lamm may be best known for leading an effort in the early 1970s to prevent the 1976 Winter Olympics from being hosted in Colorado. Lamm later sought the Democratic nomination for U.S. Senate in 1992, losing to eventual Senator Ben “Nighthorse” Campbell (“Nighthorse” would later switch parties to become a Republican). In 1996, Lamm was a candidate for the Reform Party nomination for President.

Information on memorial services is not yet available.