Masks Are Back, And Lauren Boebert Is Raging 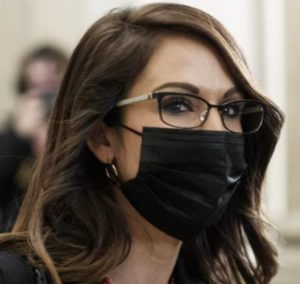 As the Denver Post’s Megan Wingerter reports, hope you didn’t throw all of yours away:

The Centers for Disease Control and Prevention recommended Tuesday that vaccinated people wear masks in indoor public places in counties with “high” or “substantial” spread of COVID-19 — which includes the majority of Colorado.

New coronavirus infections have increased in Colorado in recent weeks, and hospitalizations are trending up, though significantly more slowly than they did during the state’s four previous waves of cases.

The CDC defines substantial transmission as 50 or more COVID-19 cases per 100,000 people over the last week. About 60% of U.S. counties are above that threshold, officials said.

As of this writing, Gov. Jared Polis of Colorado is not planning on reinstating the state’s mask mandate. At least for now, increasing case rates in Colorado are not putting as much strain on hospitals–a sign that vulnerable populations are better protected today than in previous COVID-19 infection waves. In Congress, however, it’s a different story after House Speaker Nancy Pelosi re-imposed a mask requirement on the chamber effective today.

Take a guess how that’s going:

A witness told me they saw GOP Rep. Lauren Boebert throw a mask back at a floor staffer when she was offered one while trying to walk onto the floor maskless. Members can now be fined in the House when maskless

In response to the mask mandate returning to the House, in addition to childishly taking her frustrations with Pelosi’s mask mandate out on a staffer, Rep. Lauren “Q*Bert” Boebert launched into a Twitter tirade this morning about the “anti-science, totalitarian mask mandate” and went full-on conspiratorial on the so-called “Perma-demic’s” non-medical motives:

Permanent masking. Permanent state of emergency. Permanent control. This will go on until the American people just say enough is enough. The tyrants aren’t giving this up!

So folks, we don’t like wearing masks. We don’t know anyone who does. We don’t want or expect to live in a world of “permanent masking.” As for the emergency caused by the COVID-19 pandemic, at least here in the U.S. this has become a crisis almost entirely affecting the unvaccinated population. Boebert has been openly discouraging her supporters from accepting the “experimental vaccine” from the very beginning, even as Mesa County in her district became the state’s epicenter for continuing spread of the virus.

In short, Boebert is doing everything she can to make this emergency permanent. By encouraging her supporters to go unvaccinated and resist mask wearing–the two most effective steps we can take to reduce the spread of COVID-19–Boebert is helping make her own dark prophecy come true. Except for the nefarious motives, of course, though fortunately for Boebert she never has to prove that part.

If the goal is really to end the pandemic, Boebert is her own worst enemy.  She either doesn’t know that or doesn’t care. Either way, Boebert represents the worst-case scenario for leadership at a moment when leadership is desperately needed.