At first glance, it just seems like another serving of talk-radio red meat from Colorado’s favorite Republican train wreck Rep. Lauren “Q*bert” Boebert–a presumably dead-on-arrival appropriations amendment striking a blow against that most un-Godly of communist contraptions, the bicycle:

Rep. Lauren Boebert has filed an approps amendment which would prevent the Interior Department from subsidizing employees’ travel by bicycle 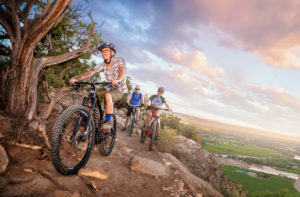 On the one hand, it’s easy to understand: Boebert is a big fan of oil and gas, the kind of devoted fan you can really only be if you don’t think about it too much “Drill Baby Drill” style. Naturally, ICE-loving (internal combustion engine, though we assume either works) red-blooded Americans like Boebert don’t ride stinking bicycles.

The thing is, though, a lot of people in Boebert’s district do ride bicycles. In fact, the Colorado Tourism Office says some of the greatest cycling destinations are in Boebert’s own Western Slope district:

Colorado has more gold- or platinum-rated bicycle communities than any other state, according to the League of American Bicyclists. Boulder and Fort Collins are ranked platinum, while Breckenridge, Durango, Crested Butte and Steamboat Springs are gold. Silver status goes to Aspen, Colorado Springs, Denver, Gunnison and Longmont, while Arvada, Carbondale, Castle Rock, Golden, Greeley, Lakewood, Summit County and Vail make the podium with bronze.

Boebert may not value bicycling as a means of getting around, but a whole bunch of tourism-reliant communities in her district value the hell out of bicycles and the visitors Colorado’s magnificent bike trails bring. That’s in addition to the fact that people who ride bicycles are statistically much healthier, and bicycles and emit neither carbon nor coal-roll soot.

In short, Boebert just insulted a big economic stakeholder in her district for the shallow gratification of another.

We can’t see how that makes Boebert, you know, any new friends.