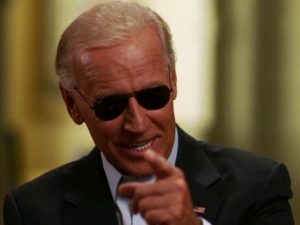 Joe Biden earned relatively high marks from both independents and members of his own party through 100 days in office, a new poll conducted by POLITICO and Morning Consult shows, but the president has yet to impress Republicans despite his promises of bipartisanship on the campaign trail and in office.

But Trump and Biden got identical cross-party grading, with 14 percent of Republicans giving Biden an “A” or “B” grade, the same marks Trump got from Democrats four years ago ahead of his 100th day. Biden’s overall approval rate was 60 percent, well above Trump’s 48 percent ahead of his 100th day in April 2017, according to the new poll.

Not only did ex-President Donald Trump never win over the approval of 60% of Americans, he never even got to 50%–the first President in modern American history to ever win and serve his whole term without any measurable majority support either in opinion polling or ballots cast. What Republicans lacked in majority strength they of course made up for in fervency, which in the wake of not particularly narrow defeat (and a little well-meaning insurrection) fueled their newfound interest in vote suppression and…well, there you go! You have arrived at the present day.

Where 60% of Americans, the most in a long, long time, feel okay about a Democrat in charge.

It’s a bigger deal than it appears in the moment, because it lacks the drama we’ve become accustomed to. But it’s these less noisy parts of history with competent people in charge when good things happen. Enjoy the good night’s sleep this affords while it lasts.