Why Does Ted Cruz Hate The Free Market? 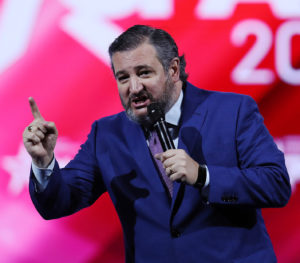 CBS4 Denver’s Ryan Mayer updates on continuing Republican rage over Major League Baseball’s decision to relocate the 2021 All-Star Game from Georgia to Colorado in the wake of Georgia’s passage of controversial vote suppression laws this year. None other than Sen. Ted Cruz of Texas, one of America’s most deeply ridiculous people, was all sound and fury on Fox News Wednesday:

Major League Baseball moved this year’s All-Star Game to the home of the Colorado Rockies, Coors Field, following the passage of new voting laws in Georgia in late March. The decision from MLB was met with backlash from Republicans including Texas Gov. Greg Abbott, who declined to throw out the first pitch at the Rangers home opener because of what he called a “false narrative” from the league. One of the senators from Abbott’s state, Sen. Ted Cruz, aired his displeasure with the move on Fox News on Wednesday…

“We saw Delta Air Lines do this and give in Atlanta in a way that was shameful. We saw Coca Cola do it. We saw, I think most disturbingly, Major League Baseball, yank the All-Star game out of Atlanta and move it to Denver. I have to say it really does illustrate how absurd and unconnected to substance these moves are,” Cruz said. “Atlanta is 51% African American, they moved it to Denver, a city that is 9% African American, because they’re such woke social justice warriors that they’re going to take $100 million out of the pockets of the African American small businesses and workers in Atlanta. It makes no sense. It’s dangerous and I do think there is a strong backlash that is building.”

Of course the issue was never the relative racial composition of these two cities, but the disparity between the ease of voting in the state of Georgia vs. Colorado, especially after passage of this latest legislation in Georgia serving no purpose other than to reduce voter participation. Colorado by contrast has some of the highest rates of voter participation in America, with an election system considered the nationwide gold standard for being easy to vote and hard to cheat. Everything else is a diversion from the issue Ted Cruz doesn’t want to acknowledge, which is that Joe Biden won the state of Georgia–and Cruz’s Big Lie of a stolen election almost broke the country a few short months ago.

And for the record, thanks to CBS4 for the in-line fact check, Cruz is wrong about the one point he’s making too:

Truist Park, the home of the Braves and original host to this year’s game, is located in Cobb County about 14 miles outside of downtown Atlanta. In the most recent census data, Cobb County was found to be 62.4 White and 28.8 percent Black. [Pols emphasis]

So, there’s that. But in a larger sense, what we have here is an unresolvable conflict between the reality that most of us acknowledge and the “alternative facts” universe of Donald Trump’s Republican Party. Corporate interests like Major League Baseball have no obligation or even incentive to ignore the major injustice of suppressing the vote in Georgia in order to prop up Trump’s Big Lie. Their obligation is to the reality-based community that is both a majority of the public and the larger part of the American economy.

It’s the free market at work–and just like the elections, Republicans like Ted Cruz only respect it when they win.