Get More Smarter on Thursday (March 25)

Today is National Lobster Newburg Day; please eat your lobster responsibly. Let’s Get More Smarter; if you think we missed something important, please include the link in the comments below (here’s a good example). If you are more of an audio learner, check out The Get More Smarter Podcast. And don’t forget to find us on Facebook and Twitter.

► The alleged shooter in the Boulder King Soopers massacre on Monday made his first court appearance today. Ahmad Al Aliwi Alissa is being held without bail as he awaits the opportunity to enter a plea on 10 first-degree murder charges. Alissa’s defense attorney asked a judge for more time to conduct a thorough mental health evaluation of her client.

As Colorado Public Radio reports, the weapon used in Monday’s shooting is essentially an assault rifle packaged as a handgun.

► Congressman Joe Neguse (D-Boulderish) is leading an effort to convince President Biden to sign an executive order banning the importation of assault weapons. From The Washington Post:

More than 60 House Democrats are pressing Biden to take “life-saving action” and sign an executive order that would ban the importation of assault weapons after back-to-back mass shootings killed 18 people in the United States.

Days after Biden expressed support for “common sense steps” that could curb gun violence, the Democrats sent a letter Thursday morning urging him to keep his campaign promise and ban foreign firearms, including semiautomatic rifles and high-capacity magazines…

…“This week, my community in Boulder witnessed a horrific and senseless mass shooting in which 10 individuals tragically lost their lives,” Neguse said in a statement. “Our hearts are breaking from this tragedy, and we know this grief is not ours alone, but carried by a nation that has witnessed the horrific pain of gun violence far too many times. It doesn’t have to be like this.”

► As Jesse Paul reports for The Colorado Sun, state lawmakers may look to add Colorado to the list of states (currently at seven) that have banned assault rifles:

Already lawmakers at the state Capitol are having preliminary conversations about if and how to move forward with such a bill. It’s unclear if there’s enough political will and time left in the 2021 lawmaking term to get the complicated policy done…

“We want to be very thoughtful,” Hooton said. “We want to make sure what we introduce we can pass, we can enact. There are some clouds breaking.”

Lawmakers acknowledge that a Congressional assault weapons ban would be more effective than a state version, but they’re waiting for Congress to take action. Colorado Public Radio has more on the state proposal.

Lawmakers are considering legislation to create a fee on certain types of insurance coverage in order to create a fund that could be tapped in the event of a natural disaster.

The Grand Junction Daily Sentinel reports on legislation intended to protect animals that are a part of traveling shows.

►  Colorado may have made its final revisions (fingers-crossed) to the color-coded COVID-19 dial.

► Governor Jared Polis visited the scene of the Boulder shootings on Wednesday:

Gov. Jared Polis @GovofCO pays his respects Wednesday at the memorial fence outside a #Boulder #KingSoopers grocery store where 10 people were shot and killed in an attack on Monday. @CPRNews pic.twitter.com/aR6yb1nwU6

Thank you to everyone who lined the roadways, overpasses and more this afternoon to show your support as fallen BPD Officer Eric Talley was escorted from the Coroner’s Office to the funeral home. Words can’t express just how much this meant to us #BoulderStrong pic.twitter.com/Ri6MQXXhqP

► Peterson Air Force Base in Colorado could be used as a holding facility as DHS officials work to process a mass influx of unaccompanied minors at the U.S.-Mexico border.

► Results are still being tabulated from Israel’s fourth parliamentary election in the last two years. It appears that Prime Minister Benjamin Netanyahu will not have enough support to form a parliamentary majority.

► As POLITICO reports, South Dakota Sen. John Thune — a Republican in line to eventually replace Sen. Mitch McConnell as caucus leader — is still mulling whether or not to seek re-election in 2022. Former President Donald Trump has promised to support a primary challenger to Thune, who angered The Big Orange Guy for being insufficiently subservient.

► As Marianne Goodland reports for the publication formerly known as the Colorado Statesman, one Colorado Republican group wasted no time in vomiting out a nonsense theory about the Boulder shootings:

A group that calls itself “the Conscience of the Republican Party” claimed Tuesday that recent mass shootings are part of a Marxist plot for gun control.

“It would seem ‘mass shooting incidents’ are resuming… Just in time to provide the basis for a propaganda-blitz in support of disarming innocent people,” according to the Facebook post on Tuesday from the Republican Liberty Caucus of Colorado. The post was published less than 24 hours after the shooting at a south Boulder King Soopers that killed 10 people, including Officer Eric Talley, an 11-year veteran of the Boulder Police Department.

“The timing of these things is suspicious, to say the least,” according to the Facebook post published around 2 p.m. Tuesday. “That may seem horrifically cynical, but there is good reason for suspicion with the Marxist Party in power. Their campaign to disarm Americans is a cornerstone of of their Utopian vision.”

Reality, friends, is much less complicated than you think.

► Unemployment claims have dropped to their lowest level since the COVID-19 pandemic began.

► Another mass COVID vaccination site has opened in Larimer County.

► The Cherry Creek School District selected its new superintendent. Several of Colorado’s largest school districts — including Denver and Jefferson County — are still in the process of finding new superintendents.

► The Washington Post follows up on a column from Jennifer Rubin earlier this week in assessing Republican concerns about extreme Senate candidates in Ohio and Missouri:

One candidate resigned the Missouri governorship in disgrace, facing criminal charges and allegations that an extramarital affair had turned violent.

Another, an Alabama congressman, served as President Donald Trump’s warm-up act for the “Stop the Steal” rally that preceded the Jan. 6 Capitol riot, urging participants to “start taking down names and kicking ass.”

A third recently had his Twitter account temporarily suspended when the Ohio hopeful referred to some of the people crossing the southern border as “Muslim Terrorists” and “Mexican Gangbangers.”

And that could be just the beginning.

That eerie sound you hear is the ghost of Todd Akin’s disastrous 2014 Senate campaign in Missouri.

► It appears that New York will become the next state to legalize recreational marijuana, though the first official weed sales are probably about a year away.

Universal Background Checks on law-abiding gun owners is a non-starter.

We should start discussing universal background checks for the thousands of people pouring across our borders.

Watch how quickly background checks would become “racist” to Democrats.

► Texas Attorney General Ken Paxton is refusing to turn over text and emails that he sent and received on January 6, which isn’t at all suspicious. 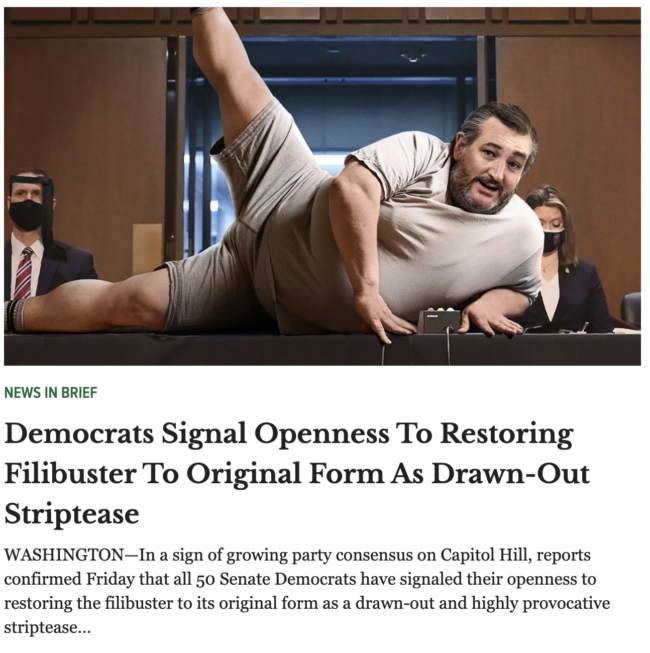 ► Rachel Maddow of MSNBC says that Colorado’s experience with responding to mass shootings with gun safety regulations shows that the political minefield isn’t as dicey as pro-gun zealots would have you believe.