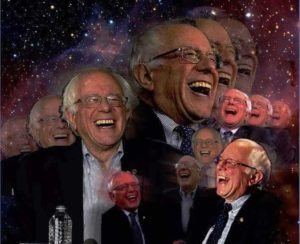 Politico reports, the jockeying for position in a Joe Biden administration’s Cabinet is already underway, with a big name showing interest in a big job:

Sen. Bernie Sanders is hoping to be a part of Joe Biden’s potential administration and has expressed a particular interest in becoming Labor secretary, two people familiar with the conversations tell POLITICO.

“I can confirm he’s trying to figure out how to land that role or something like it,” said one person close to the Vermont senator. “He, personally, does have an interest in it.”

…Former Sanders campaign manager Faiz Shakir said Sanders has not talked directly with anyone on the Biden campaign about a future role, but plans to push Biden, his former Senate colleague, to “include progressive voices” in both the transition and in a potential new administration.

Labor Secretary seems like a good capstone for Bernie Sanders’ career after two well-fought presidential bids and a lifetime of fighting for the working class. Sanders’ reported interest in a Cabinet position is the first of what will become its own wave of interest and speculation over who will be tapped to serve in the likely event of Biden winning the presidency. In 2009 Barack Obama called up Sen. Ken Salazar of Colorado to serve as Secretary of the Interior, creating the vacancy filled by Sen. Michael Bennet–now another sitting U.S. Senator with short-list Cabinet potential.

Don’t jinx Election Day by speculating too much, but the next generation of political turnover/advancement is just over the horizon. Colorado has plenty of talent to contribute to a Biden administration, and Colorado Democrats have a deep bench ready to move up.