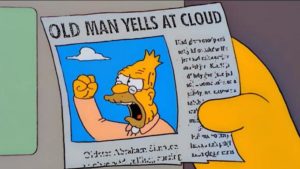 Things are not going well for President Trump. Ballots are being cast in record numbers across the country, and polling shows that Democratic Presidential candidate Joe Biden maintains an historic lead over Trump as we enter the final two weeks of the 2020 election cycle. To nobody’s surprise, Trump is not reacting well to any of this…but he’s still figuring out new ways to make a fool of himself.

Trump is making new headlines today for attacking Dr. Anthony Fauci, the nation’s top infectious disease specialist, because Fauci won’t help him pretend that the coronavirus is no longer a problem. As The New York Times explains:

President Trump attacked Dr. Anthony S. Fauci, the nation’s leading infectious disease specialist, as “a disaster” on Monday and said, despite experts’ warnings that the nation was headed toward another peak in the coronavirus outbreak, that people were “tired” of hearing about the virus and wanted to be left alone.

He made the remarks during a call with campaign staff that reporters listened in on. Mr. Trump’s campaign manager, Bill Stepien, began the call by talking about the Republican ground game and other factors that he said supported Mr. Trump’s path to victory.

But the president had other things on his mind. “People are tired of Covid,” he complained. “I have the biggest rallies I’ve ever had. And we have Covid. People are saying, ‘Whatever. Just leave us alone.’ They’re tired of it.”

He added, “People are tired of hearing Fauci and these idiots, all these idiots who got it wrong.” [Pols emphasis]

Mr. Trump also called Dr. Fauci a “nice” guy, but he said, “He’s been here for 500 years,” and added, “Every time he goes on television, there’s always a bomb, but there’s a bigger bomb if you fire him. This guy’s a disaster.” 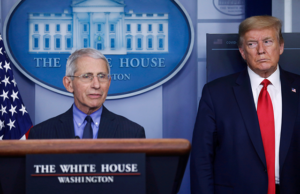 One of these men is a trusted source of information about public health matters. The other is the President.

This rhetoric does not match with a much-criticized campaign advertisement in which the Trump campaign uses Fauci’s comments out of context in order to make it look like The Big Orange Guy has done everything possible to contain COVID-19. Trump’s attacks on Fauci are also at odds with public opinion; according to a Kaiser Family Foundation poll in September, 68% of Americans trust Dr. Fauci to provide accurate information about the pandemic, compared to a 40% rating for Trump. Even Colorado Sen. Cory Gardner, who is as much as Trump sycophant as anyone, has called Dr. Fauci a “national treasure.”

Perhaps Trump is escalating his attacks on Fauci because he’s having trouble landing other messages directed toward 2020 voters. During a campaign rally in Nevada on Sunday night, Trump tried to woo suburban women to support his re-election campaign by claiming that he has made their dishwashers more efficient.

No, seriously. This is what Trump said on Sunday:

“Go buy a dishwasher. I said what’s wrong with this thing? It doesn’t clean the dishes right. The women come up to me, the women who they say don’t like me — they actually do like me a lot. Suburban women, please vote for me. I’m saving your house. I’m saving your community. I’m keeping your crime way down.”

OK, so. The logic behind this argument goes like this. 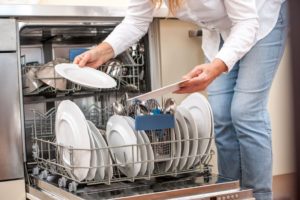 Historians will argue for centuries about the great dishwasher debate of 2020.

Trump has long been obsessed with the idea that government regulations have led to decreased water pressure. As National Public Radio reported in December 2019:

On the night that the House of Representatives voted to impeach President Trump, he delivered a two-hour campaign rally speech that took a detour — into the bathroom. His long riff about plumbing, household appliances and lightbulbs had the crowd in Battle Creek, Mich., cheering and laughing along…

…“Remember the dishwasher, you’d press it. Boom — there’d be like an explosion. Five minutes later, you open it up, the steam pours out,” Trump said reminiscing about dishwashers that used more energy and water to wash and dry dishes. “Now you press it 12 times. The women tell me, again. They give you like four drops of water.”

Setting aside his assumption that women are the ones who do dishes, Trump also shared his thoughts on faucets and shower heads. [Pols emphasis]

At Trump’s behest, actual federal government employees have been spending time in recent months working to change federal laws intended to improve water efficiency and reduce waste, but as The Associated Press noted in August, this is not an issue that anybody really cares about:

Andrew DeLaski and officials at Consumer Reports said there’s been no public outcry or need for change. The Department of Energy’s own database of 12,499 showerheads showed 74% of them use two gallons or less water per minute, which is 20% less than the federal standard.

It’s hard to say if talking about dishwashers is more or less insulting to suburban women than promising to keep them safe from scary brown people, which had been Trump’s focus prior to Sunday’s rally.

Elections are about choices. If you believe that Dr. Fauci is an alarmist and that the real problem in America is water pressure, then Trump is absolutely your guy in 2020. We have no doubt that Joe Biden is more than happy to have the support of everyone else.