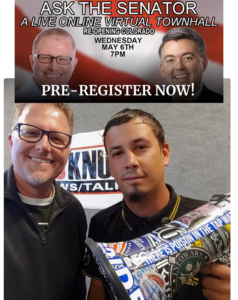 Still, Tubbs said he’d ask “what I perceive to be tough questions” of Gardner.

Those attending the online event are encouraged to submit questions, but Tubbs didn’t know how he’d choose which questions to ask Gardner.

“I don’t know, Pete, to be honest with you, the process of what questions are going to be asked,” Tubbs told KNUS’ Peter Boyles this morning.

Tubbs said prior to the event on air that he would not be  working with Gardner’s staff on deciding which questions would be asked.

In an indication that his questions won’t cause problems for Gardner, Tubbs said on air not to expect “breaking news” from the event.

“I have noticed of late the little digs by a certain anchor on Channel 9. I don’t get it,” said Tubbs on air, almost certainly referring to Clark who’s the object of frequent criticism on KNUS.

Tubbs did not return a text to confirm that he was referencing Clark or why he’s upset with him.

Yesterday, Clark tweeted, “Gardner’s office has not responded to a request for information on the talk radio event and other town halls – but his office typically does not respond to our questions.”

Tubbs openly acknowledged on air that Gardner is his friend, and Tubbs knows Gardner’s wife and family.

Overall, Tubbs said that he thinks the conversation with Gardner will be “hyper-focused on getting the economy back and getting the state back to where we need to be.”

Tubbs said he’d ask Gardner about the “continuing efforts” of the Trump administration to fight COVID-19, a conversation that could be uncomfortable for Gardner, if Tubbs asks serious questions.

Gardner is widely known to avoid criticizing Trump on any issue, including Trump’s gaffes and substantive mishandling of the federal coronavirus response.

Last month when asked to rate Trump’s handling of the COVID-19 crisis, Gardner refused saying, “I think it’s important to not look and try to provide some kind of a grade.”

Tubbs also said he’d ask Gardner about mask-wearing requirements, which have been dissed by Republicans, from Colorado GOP leader Ken Buck to activists like Karen Kataline.

After the KNUS event was announced, Democrats pointed out that a KNUS producer was apparently fired from the radio station after serious accusations surfaced that he was a neo-Nazi–and that Tubbs defended the producer.

The online event will last about an hour, said Tubbs on air, and “if it’s successful, maybe we’ll do it again.”