Bennet Shows What Accountability Looks Like, Warts and All 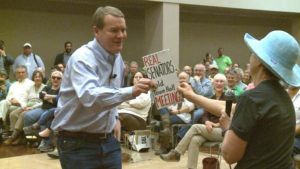 Colorado Public Radio’s Natalia Navarro reports on a town hall held by Colorado’s senior U.S. Sen. Michael Bennet in Denver last Friday–harkening back to the days when Colorado’s Senators routinely advertised in advance for anyone who wants to show up and lay on the hard questions in a public forum:

Sen. Bennet was in Colorado for his first constituent event in months Friday at the Montview Boulevard Presbyterian Church in Denver. He said the only way to make meaningful progress on issues from climate change to immigration is to boot Trump from office.

“We can’t act on climate as long as we have a climate denier in the White House,” he told the crowd of about 200 people.

Much of the town hall focused on his presidential campaign, but Bennet said it’s not affecting his ability to serve Colorado as its senior senator.

“I follow what’s going on in Colorado when I’m here and when I’m not here,” Bennet said. “I think that I’ve continued to represent the state well and that will always be my first priority.”

He also offered his endorsement of former Colorado Gov. John Hickenlooper, who is now vying for the Democratic nomination in the race against the state’s vulnerable Republican Sen. Cory Gardner.

Bennet said the country should provide a public health care option, a route with more public support than the plans of several of his Democratic opponents, namely Sen. Elizabeth Warren of Massachusetts.

“What I don’t want to do is spend the next 10 years fighting a losing battle for Medicare for all,” he said.

From missed votes in the Senate to Bennet’s controversial disparagement of leading Democratic presidential candidates while pursuing his own longshot run, base Democratic voters had plenty to take issue with, and by all accounts they did–holding Bennet’s feet to the fire for over an hour in Friday’s town hall. Despite fielding hard questions from the mostly left-leaning Denver audience, Bennet impressed the crowd with strong answers on impeachment, stating he is a “likely vote to convict,” and unequivocally making the case for robust action on climate that can only begin once Donald Trump is out of office.

Although Sen. Bennet has arguably been spending lots of time with voters as a presidential candidate, we’re very glad to see him hold a town hall back home, even if not all of his answers were likely to satisfy the audience. Bennet’s willingness to be held accountable by the voters he represents throws the refusal of Sen. Cory Gardner to afford Coloradans the same courtesy into harsh relief. If Bennet can stand and deliver even the unpopular answers as a 2020 candidate, there’s absolutely no reason why Cory Gardner can’t.

In so doing, Bennet’s example hurts Gardner more than anything Bennet himself could say.