Up until today, the website of Senate candidate Jane Norton was a typical purple-and-mountain Colorado politics affair–frankly a bit on the cookie-cutter side designwise and kind of boring, not a site you’ll be talking about after you visit. Don’t get us wrong, after all the fun we’ve had over the years with varying degrees of website ignominy, that’s probably a good thing.

No longer boring, anyway, as her rendezvous with destiny approaches (spelled p-r-i-m-a-r-y): 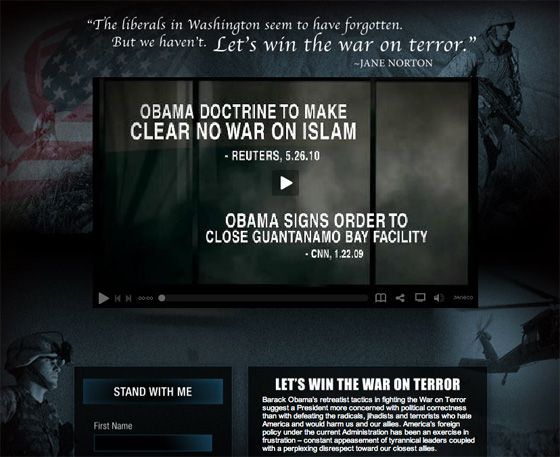 The video from that inspiring new homepage:

UPDATE: Sorry, we were going to avoid editorializing on the video spot that’s the focus of this new homepage–but the jet engine thing is just…well, it’s notably tasteless.

UPDATE #2: We got to thinking about it, and it occurred to us that a “war on Islam” would actually be a very bad thing. Somewhere between leading off with that particular headline and the violent interruption of Norton’s “never forget” boilerplate by the screeching of jet engines, we begin to realize that a terribly low road has been taken here.