On to the Runoffs

UPDATE: A newsworthy come from behind win for Denver’s Initiative 301, decriminalizing “magic mushrooms,” which is now ahead outside the recount margin:

Denver becomes the first city in America to decriminalize hallucinogenic mushrooms. The final vote was 50.56%-49.44% (outside the automatic recount margin). #9NEWS #copolitics 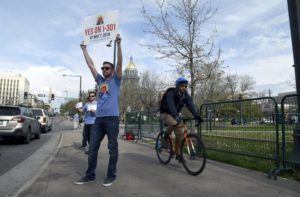 Shrooms for you, Denver!

The results in Denver’s 2019 election will spur multiple runoffs just under a month from now. Incumbent Mayor Michael Hancock must best former RiNo Art District president Jamie Giellis to keep his job on June 4, when five Denver City Council races will also be decided. Meanwhile, Ordinance 300, better known as Right to Survive, failed by a margin that left plenty of veteran political observers slack-jawed, while Ordinance 301, which called for the decriminalization of psilocybin mushrooms, fared better and isn’t technically dead, but its chances have faded in a big way…

Runoffs will also be necessary in District 1, where Amanda Sandoval and Mike Somma are set to face off, and in District 3, where Jamie Torres and Veronica Barela are still standing. And while Timothy O’Brien had no opposition in his bid to remain Denver auditor, the sprint for clerk and recorder proved tight, tight, tight. Signs point to Paul López and Peg Perl winding up back in the ring next month.

In the at-large council race, incumbents Debbie Ortega and Robin Kniech held on to their seats over a large field of challengers. But from the mayoral race where the incumbent will face a runoff for the first time since 1995 down to a surprisingly hot clerk and recorder’s race where Peg Perl squeaked into a runoff against the better known Paul Lopez, the 2019 Denver municipal elections are only at halftime. Original post follows.

As of 8:30pm it is looking increasingly likely that many of Denver’s races will be decided in runoffs on June 4th. With just over 100,000 ballots counted Mayor Hancock leads by just 39.7%, not enough to avoid facing one of his challengers next month.

Likewise Clerk and Recorder, District 1, District 3, District 5, and District 10 all are very likely to go to a run off at this hour. In District 9 Albus Brooks may yet get enough votes to pass the magic 50% mark, but as of right now he’s only at 48.07%. Incumbent Chris Herndon in District 8 is probably a bit happier with 51.15% of the vote. That could also go to a run off, but unlike in District 9 his closest challenger only has 22.26%. Still not a great result for an incumbent.

There is no doubt, however, that ordinance 300 has gone down to a wide defeat. Over 80% of the votes counted so far have been against it. After this bad showing in Denver it would be surprising to me if a similar bill gets out of committee in the legislature.

Edited to Add: The Denverite relays that there are only 139,412 ballots. This means that there are just short of 40,000 or 28% left to be counted. The next update for people staying up that late will be 10pm.