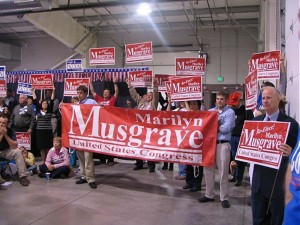 Back to the future!

Taking note of a report late last week from Ernest Luning of the Colorado Springs Gazette–one of the central figures in the years-long quest by the evangelical right in Colorado to pass a constitutional “Personhood” abortion ban amendment, Kristi Burton Brown, is now running for the vice-chairmanship of the Colorado Republican Party:

Burton Brown, 31, maintains that the GOP’s thumping losses in the November election will eventually amount to “a momentary blip on the screen” if the party turns itself around ahead of the 2020 election.

“The Republican Party’s not dead by a long shot in Colorado. But we really need to rebrand ourselves and reimagine how things are done,” she said. “For too long, we’ve done the same old thing the same old ways. We need to make it more fun to be a Republican, we need to engage people. We need to tell stories.” [Pols emphasis]

She drew national attention a decade ago as the face of Amendment 48, a state ballot initiative also known as the personhood amendment, which would have changed the definition of a person under the state constitution to “any human being from the moment of fertilization.”

Although by all accounts a very good advocate for her signature issue of banning abortion, the idea that Kristi Burton Brown represents a “rebranding” of the Colorado Republican Party is a (pardon us) difficult pill to swallow. After sponsoring “Personhood” abortion ban ballot measures in Colorado that were not just rejected wholesale by Colorado voters but did significant collateral damage to Republican candidates running on the same ballot, Burton Brown went on to become an attorney for the Susan B. Anthony List–an anti-abortion organization where none other than former Colorado Rep. Marilyn Musgrave serves as Vice President of Government Affairs.

Don’t get us wrong, this is not an attack on Burton Brown’s character or qualifications, which on paper are exemplary for the job of Colorado GOP vice-chair. What she does not represent, however, is any kind of new brand for Colorado Republicans. In every way that matters, she is a creature of the bad old days leading to last November’s electoral bloodbath.

Which seems to be exactly what they want, lest we harbor any delusions.