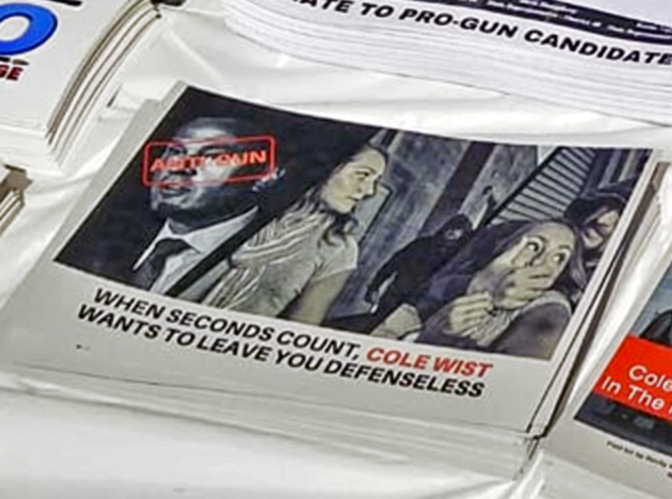 Colorado state representative Steve Humphrey (R-Severance) shared a photo of a flyer that accuses his party’s Assistant Minority Leader, Rep Cole Wist (R-Centennial) of wanting to prevent women from being able to defend themselves. 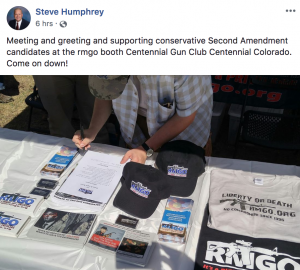 Rocky Mountain Gun Owners distributed the flyer at this weekend’s Centennial Gun Club Firearms Festival. Humphrey  posted a picture of the RMGO table, including the flyer, with the caption “Meeting and greeting and supporting conservative Second Amendment candidates at the RMGO booth.”

The flyer, one of two on the table attacking Wist, labels the House’s number two Republicans as “anti-gun” and says he “wants to leave you defenseless,” below an image of a woman being assaulted on the street.

RMGO, along with Minority Leader Patrick Neville, attacked Wist repeatedly during this year’s legislative fight over his proposed “red flag” bill. The bipartisan bill would have created a civil legal process called an Extreme Risk Protection Order to enable family members and law enforcement to temporarily remove guns from an individual who poses danger to themselves or others.

Sponsored by Assistant Minority Leader Wist, the bill was also supported by District Attorney George Brauchler and Douglas County Sheriff Tony Spurlock, both Republicans. It passed the House 37-23, with Wist and Rep. Dan Thurlow (R-Grand Junction) joining all Democrats in support, but failed to get out of committee in the Senate.

Voicemail messages requesting comment were not immediately answered by either Rep. Humphrey or Rep. Wist. This post will be updated with any replies received.

This post was first published by the Colorado Times Recorder.