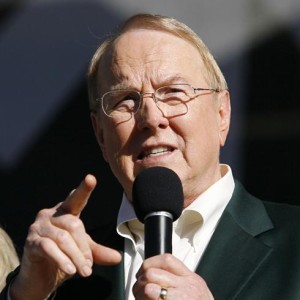 Dr. James Dobson, the founder of Colorado Springs-based Focus on the Family, has been somewhat less in the spotlight since retirement from his world-famous religious right political advocacy organization, having lost some amount of clout after unsuccessfully employing the full weight of the Almighty against the election of Barack Obama–even asking supporters to pray for rain on Obama’s address to the Democratic National Convention at Denver’s Mile High Stadium.

But since the election of President Donald Trump, who as we all know restored the sacred covenant between church and state as only a man who “grabs ’em by the p—y” can, Dobson is back on the scene–and as Right Wing Watch reports, intervening on President Trump’s behalf with the same higher authority:

On Friday, James Dobson joined Intercessors for America for the organization’s monthly prayer conference call, during which he called on conservative Christians to engage in a day of fasting and prayer against efforts to impeach President Trump.

Dobson said that he “felt sorry for this man” when he and other Religious Right leaders met with Trump in the Oval Office last month because “so many people obviously hate him … He faces the combined opposition from the mainstream media, from members of Congress—both Democrats and Republicans, not all of them, but many of them—the entertainment industry, [and] the special interest groups who seem determined to bring him down.”

Dobson warned that “this country will be in serious trouble if they’re successful in impeaching this man” and is therefore urging Christians to pray and fast in order to protect Trump.

“I’m calling for a nationwide movement to pray for him,” Dobson said. “I’m calling for a day of fasting and prayer. I hope that Christian people from coast to coast will join in that time; the date is your choosing, but we do need to be praying for our president.”

Yes, faith is sacred and you can believe whatever you want. And if you believe praying for the success of the vulgar womanizing rich guy who’s trying to cut aid for the poor is what Jesus would do, you’re allowed. We have no doubt Dr. Dobson is a Christian first and a partisan Republican second, or at least he believes fervently he is.

It’s not a prayer we would offer though, particularly not under a thunderstorm.