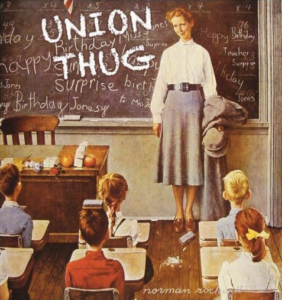 Evidently Kyle Clark didn’t like his school teachers very much.

School board candidates backed and financed by teachers unions [Pols emphasis] are in positions for convincing wins in Jefferson County and Douglas County, with strong leads on Wednesday morning.

In Douglas County, where eight candidates are running for four seats, the union-backed slate [Pols emphasis] needs to flip only one race to gain control of the school board. If that happens, the new school board majority would likely abandon its defense of a controversial voucher program instituted by conservative school reformers. A legal challenge to that program is working its way toward the Supreme Court…

The union-backed [Pols emphasis] candidates for the DougCo school board maintained double-digit leads over the so-called education reform slate into Wednesday.

…In Jefferson County, three of five Board of Education seats were up for grabs. Two of the races were contested by conservative candidates looking to unseat union-supported [Pols emphasis] board members. 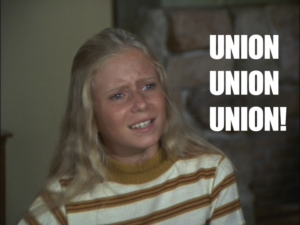 Kyle Clark’s full story on the school board elections in Douglas County and Jefferson County is eleven sentences long. Four of those eleven sentences–in addition to the title of the story–contain the words “unions,” “union-backed,” or “union-supported.” Now, we’re not disputing that the Colorado Education Association and their subsidiary organizations in Jefferson and Douglas Counties played a role in these elections–certainly they did, just as they did in the historic recall elections two years ago that swept a controversial far-right school board majority in Jefferson County from power.

But here’s the thing: over 120,000 Jefferson County voters participated in the school board elections that concluded yesterday. No doubt the teacher’s union’s support was helpful to the candidates who prevailed, but it’s Jefferson County voters who made the final decision–not the teacher’s union–and the winning candidates won by a landslide. And that means to obsess over the role of the union to the absolutely ridiculous extent Kyle Clark did in this story makes what he did here something other than journalism. This is a story written by someone so steeped in the demonization pushed by conservatives of organized labor that he completely lost sight of the larger reality–which is not “the unions,” but the fact that 120,000 voters who threw far-right radicals out of power in Jefferson County two years ago reaffirmed their choice by a similarly overwhelming margin.

Much like the Denver Post’s just-plain-sad endorsements that the voters ignored, this is a local TV newsman demonstrating only one thing: that he listens to the wrong people.