UPDATE: Kurtis Lee of the Denver paper breaks: Perry Haney will withdraw from the CD-6 race, leaving state Rep. Joe Miklosi as the Democratic contender and ending the primary.

Republicans may be kicking themselves over this legal challenge. We thought it was a smart strategic move to go after Haney by Republicans, because publicly attacking him helps the average voter to think that he is the stronger of the two Democrats running for the seat (the other being Rep. Joe Miklosi). Despite Miklosi’s faults, which we’ve documented here, he is absolutely a better candidate than the unknown and underfunded Haney.

But in the end, the GOP’s attacks probably made Haney’s quixotic run more trouble than it was worth.

The Colorado Republican Party filed a complaint with the Federal Election Commission last week, alleging that CD-3 CD-6 Democratic self-funding candidate Perry Haney spent thousands of dollars on a run for Congress “somewhere in Colorado” before appropriately filing with the FEC. From the letter sent by Colorado GOP chairman Ryan Call:

An individual becomes a candidate and triggers registration and reporting responsibilities under the Act when campaign activity exceeds $5,000 in either contributions or expenditures.  2 USC § 431(2).  A candidate must file a Form 2 Statement of Candidacy within 15 days of becoming a candidate.  2 USC § 432(e)(1).  Within 10 days after it has been designated by the candidate, the principal campaign committee must register by filing with the FEC.  2 USC § 433(a).

However, once an individual engages in campaign activity, if he or she has raised or spent more than $5,000, the individual must register as a candidate with the FEC.

In short, candidates are permitted some wiggle room between beginning the process of “testing the waters” to enter a congressional race and formally doing so. The problem for Haney, as Call and GOP attorneys allege, is that Haney’s promotional efforts as a potential CD-3 candidate over the summer go well beyond merely “testing the waters.” Call says that Haney was possibly in violation upon receipt of more than $5,000 in July of last year, and by the time a “Haney for Congress” video was uploaded to Youtube at the end of last August, very likely so.

We’re withholding judgment on this complaint pending further analysis, as some of the circumstances here are novel–we’re not sure, for example, how the fact that Haney was not yet running for a specific race (or, at the very least, looking at a different race than the one he ultimately chose) might affect the application of the law. We’re not election lawyers.

But we’ll say this: Haney’s lurking on the margins of two congressional races last year, and having filed the proper paperwork for the race he chose months after his “exploratory” period began, is a wide-open target for Republicans on both a messaging and legal harassment level. To whatever extent Haney becomes a serious candidate, he’s going to be hit with the charge of having shopped for a congressional race irrespective of experience or community ties. Haney had better develop good answers to these questions, or he’s going nowhere.

One of the quirks that come in a redistricting year is that the Federal Election Commission is a bit lax on requiring candidates seeking a Congressional office to actually state which office they plan to run for. Take, for example, the case of Democrat Perry Haney, a wealthy Greenwood Village chiropractor who wants to run for Congress…somewhere. 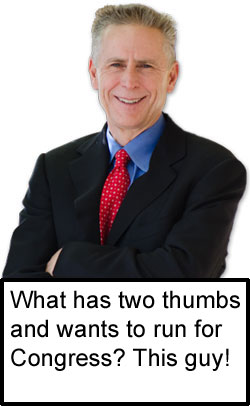 Haney has been meeting with Democrats in Colorado and in Washington D.C., telling them that he plans to run for Congress, but he won’t say where he plans to kickoff his campaign. Is it against Republican Rep. Mike Coffman (and Democratic challenger Joe Miklosi) in CD-6? Is it to take on Republican Rep. Scott Tipton in CD-3, where Democrat Sal Pace has been running full-steam ahead for months?

We visited his website, paid for by “The Perry Haney for Congress Exploratory Committee,” to “explore” that question, and it doesn’t indicate anywhere that he has decided where he will run, though a look at some of the pictures and the text makes it appear as though he’s definitely leaning more towards CD-3 than anywhere else. We did get a kick out of his issue statement “On Career Politicians,” where Haney talks, of course, about how he is not a career politician; but he’s got the career politician thing figured out, it seems, since he won’t even commit to a district.

Haney recently sent a mail piece to Democratic delegates in CD-3 that left a UPS Store P.O. Box in Grand Junction as the return address, giving more indication that he may, perhaps, choose to run in Southern and Western Colorado (though he never explicitly says in the letter that he is running for Congress in CD-3). If he does run there, he will have a lot of explaining to do about being a wealthy Denver resident with little previous involvement in politics. Haney has made several donations to Democrats over the years, but he has also donated regularly to Republicans; Haney gave Scott McInnis a $500 check in his campaign for Colorado governor in 2009, $250 to Republican Attorney General Gale Norton in 1995, and $200 to the National Republican Congressional Committee in 1996. This won’t help him earn any friends in a Democratic primary, either.

We don’t see how Haney could possibly win a Democratic primary wherever he ultimately decides to run for Congress. We hear that he does have some personal wealth that he might commit to a campaign, and he had better hope so — we don’t see him raising much money as an unknown Denverite with no natural base in CD-3 or CD-6. But maybe he’ll figure this out as part of his grand “exploration.”