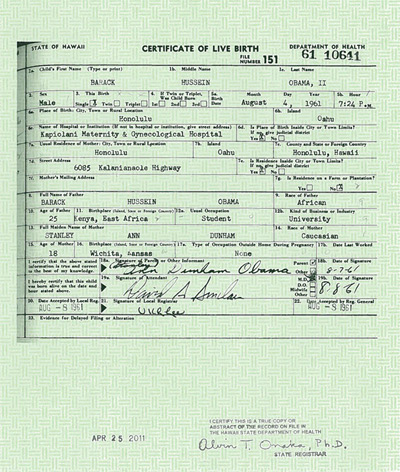 The White House issued a press release today that includes the long-form birth certificate of President Barack Obama, showing (again) that Obama was indeed born in the United States. As Politico reports:

In an extraordinary move, President Barack Obama on Wednesday sought to put an end to questions about his citizenship, releasing a longer version of his birth certificate and calling on the media and conspiracy theorists to move on.

Businessman Donald Trump escalated the issue in recent weeks, thrusting the story back into the headlines and, as Obama scolded the media Wednesday, diverting attention from more important issues.

Obama said the nation’s work will not get done if people are “making stuff up” and getting distracted by “sideshows and carnival barkers.”…

But Obama said he decided on the release because the conspiracy theory over where he was born had eclipsed the debate on the budget several weeks ago.

We’re under no illusion that the release of Obama’s long-form birth certificate will finally quiet the conspiracy theorists, Tea Partiers and those who make money playing to them (like Peter Boyles, who plans to keep on keeping on with the birth certificate nonsense). But what this move should do is put a stop to any birth certificate stories appearing in any legitimate media outlets.

There was never a real excuse for the media to play host to this nonsense conspiracy theory, but now…no newspaper, TV network or any other outlet has any justification whatsoever to continue to run stories about this. If a legitimate news outlet continues to play up this story as though Obama’s citizenship were actually in question, then they might as well start running daily stories about how the moon landing was faked and how Elvis and 2Pac are living together on a deserted island.

If any legitimate news outlet continues this story now, they’re basically saying, We don’t care about facts. At all. It doesn’t matter if a reporter has quotes from various people saying, “I don’t believe Obama was born in the U.S.,” because that opinion is completely and utterly absurd and irrelevant. You can’t run with a story just because you have quotes from people who don’t know or don’t care about the truth.

This story should have been over a long, long time ago. But it is definitely over now.