Denver Archbishop Samuel J Aquila hosted a Memorial Mass Sunday to mark what would have been the 50th anniversary of the Roe v. Wade decision.

People filtered into the Cathedral Basilica of the Immaculate Conception at midday, waiting for the 12:30 Mass to begin. 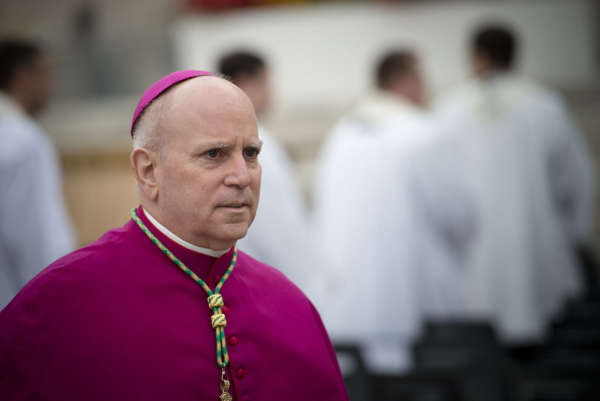 During his sermon, Aquila targeted Critical Race Theory and the transgender community, blaming each for the diminishing number of churchgoers.

“We wonder why our Churches are empty,” he stated. “Whether it is the CRT, [or] transgender ideology …. we have failed to belong to Jesus Christ.”

Aquila then called on attendees to pray for increased church involvement in government.

“Last March, in 2022, I asked all the archdiocese to pray to end the decision [Roe v. Wade] and to putting Jesus first in our Congress,” he stated. “And if you have not prayed yet with me, I encourage you to pray.”

Aquila encouraged those present to recognize the dignity of every human being, “whether it be the homeless … the immigrant …. the woman who is pregnant outside of wedlock … [or] the prostitute.”

RELATED: Denver Bishop Says It’s An ‘Act of Charity’ To Tell Gay And Trans People They ‘Don’t Conform To Nature’

After the November 19 shooting at Club Q, an LGBTQ nightclub in Colorado Springs, Aquila published an op-ed in the Wall Street Journal in which he denied accusations that the Catholic Church promoted homophobic and transphobic rhetoric that has contributed to hate crimes.

In the piece, Aquila wrote, “Our critics charge that the Catholic Church is discriminating against those who identify as gay or transgender, but it isn’t discriminatory to tell someone you think his beliefs don’t conform to nature—it’s an act of charity.”