Donald Trump: Worst President Ever. Ever. 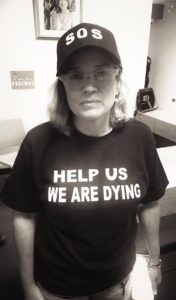 CNN reports on the growing humanitarian crisis unfolding in the United States dependent territory of Puerto Rico after a devastating direct strike on the island by Hurricane Maria–a crisis that has steadily worsened politically for Donald Trump’s administration this past week, with a yawning gap between the administration’s insistence that all is going well and increasingly desperate reports on the ground.

Early this morning, the politics of the situation shifted dramatically as Trump attacked the mayor of San Juan Carmen Yulín Cruz on Twitter, blaming her and the people of Puerto Rico for wanting “everything to be done for them.”

President Donald Trump launched an attack on San Juan Mayor Carmen Yulín Cruz on Saturday for criticizing the White House’s hurricane relief efforts in Puerto Rico, accusing her of “poor leadership” and suggesting that the island’s residents are not doing enough to help themselves.

“The Mayor of San Juan, who was very complimentary only a few days ago, has now been told by the Democrats that you must be nasty to Trump,” the President tweeted from his golf club in Bedminster, New Jersey, where he is spending the weekend. “… Such poor leadership ability by the Mayor of San Juan, and others in Puerto Rico, who are not able to get their workers to help. They want everything to be done for them when it should be a community effort.”

Mayor Yulín Cruz earned Trump’s Twitter wrath by responding negatively to comments to reporters from acting Homeland Security Secretary Elaine Duke on Thursday that she was “very satisfied” with the federal government’s response in Puerto Rico:

As of now sixteen people are confirmed dead in Puerto Rico, and with large portions of the island still inaccessible, that number is almost certain to rise. Beyond that, the struggle 3.4 million American citizens face recovering from the hurricane will take years to get through–most likely well past the end of Trump’s presidency. With that said, every aspect of Trump’s response to the situation in Puerto Rico has been colored now by these attacks on the very disaster victims his administration is charged with assisting. A president publicly slamming elected officials in the middle of disaster relief is bad enough, but Trump’s inclusion of “their workers” in his disparagement is belligerence against his own citizens on a scale that quite frankly boggles the mind. It’s unimaginable that a sitting American President would personally lash out against not just politicians, but victims in the aftermath of a natural disaster impacting millions of Americans.

Except it’s not unimaginable. It just happened.

James Buchanan, “Rutherfraud” B. Hayes, John Tyler. The title of “worst president ever” is always difficult to honestly reckon, being influenced by the news of the day and its transient impact on presidential popularity. It’s a yardstick always skewed toward the biases of the present. But by any objective measure, we believe that Trump is carving out a permanent place for himself among the very worst chief executives in our nation’s long history. It is not a statement we feel should be made lightly.

But this is too much. Trump has gone too far, too many times.