What Happened to Cory Gardner? 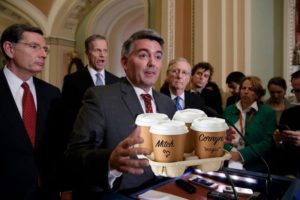 Sen. Cory Gardner (R-Yuma) is a glorified page at this point in his career.

We’ve always been critical of Sen. Cory Gardner (R-Yuma) in this space. We’ve no reason to pretend otherwise. But our critique of Gardner is usually tied to specific actions or statements from Colorado’s junior Senator — such as his refusal to hold a town-hall meeting or his astonishingly poor judgment in sitting down for a discussion with a murderous dictator.

Love him or hate him, this is not the same Cory Gardner that waltzed into a Congressional seat in 2010 and, just four years later, took out incumbent Democratic Sen. Mark Udall. That Cory Gardner was a slick, smiling, bomb-throwing partisan considered by many Republicans to be among the rising-est of the GOP’s rising stars. But this Cory Gardner — the majority party, Republican leadership Cory Gardner — is little more than a sad caricature of a Washington D.C. politician. We almost feel sorry for this Cory Gardner.

We took note of this different Gardner a few months ago, but the disastrous healthcare debate in Congress — culminating in Thursday’s “Vote-O-Rama” — stripped Gardner of whatever individualism he still had left. Then, on Friday morning, he made sure to erase all doubt.

Gardner went to great lengths in recent months to avoid taking any sort of public position on Republican efforts to repeal Obamacare in favor of healthcare proposals that got worse with every iteration. When Gardner was finally forced to take a side in the healthcare debate, he nearly pulled a muscle rushing to vote “YES” on whatever was demanded by Senate Majority Leader Mitch McConnell. Gardner was suddenly in favor of everything he once claimed to oppose. Protecting Medicaid? Nope. Keeping healthcare costs from spiraling out of control? Nah. Preserving pre-existing conditions? Forget it.

On Friday morning, a battered Gardner popped his head out from behind his office door and proceeded to shred whatever credibility he still maintained. As Ernest Luning writes for the publication formerly known as the Colorado Statesman:

U.S. Sen. Cory Gardner, a Colorado Republican, said Friday that Democrats are “finally” admitting they need to work across the aisle to find bipartisan solutions to the nation’s health care system, adding that the failure by GOP senators to overturn the Affordable Care Act won’t stop efforts to replace the legislation, known as Obamacare.

“It’s frustrating that now the recent repeal and replace vote is over we are starting to finally hear supporters of the Affordable Care Act make some of the exact points about the problems with the Affordable Care Act that they attacked Republicans for making over the last few months,” said Gardner, who was one of 13 Republican senators tasked with writing the Senate’s version of health care legislation behind closed doors earlier this year. “We are finally starting to hear those that refused to work with Republicans admit that costs are going up under this law and something needs to be done to address it.”

He added that he’s “worked so hard to replace this government takeover of our healthcare for one reason and one reason only – my constituents.” Among the problems he listed under the Obamacare were “skyrocketing premiums,” nearly 150,000 Colorado residents who didn’t buy insurance coverage facing IRS fines and just one or two insurers offering plans in a majority of the state’s counties.

“The vote last night can’t stop this effort,” Gardner said. “I’ve always urged Democrats to work with Republicans in a bipartisan manner to find solutions that drives down costs and stabilizes the insurance market. I’m not going to stop trying to fix this healthcare problem, the status quo is unacceptable.” [Pols emphasis]

Gardner is still trying to sell this nonsense? Gardner once fancied himself as the kind of political salesman who could convince eskimos to buy ice; today, he’s hawking Walkmans to teenagers.

These are silly things to say, especially when you are just hours removed from a massive legislative failure that made C-SPAN into must-watch television. These are the sad ramblings of a politician who is either unwilling or unable to accept the fact that reality has moved on without him.