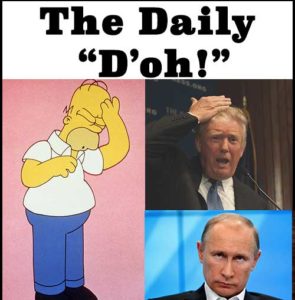 This bit of news should not get lost in today’s discussion about the Senate healthcare legislation. From the New York Times:

President Trump acknowledged Thursday that he had not recorded his conversations with James B. Comey, the F.B.I. director he fired amid the Justice Department’s investigation into the Trump campaign’s possible ties to Russia.

“With all of the recently reported electronic surveillance, intercepts, unmasking, and illegal leaking of information,” Mr. Trump said in a pair of tweets shortly before 1 p.m., “I have no idea …. whether there are ‘tapes’ of my conversations with James Comey, but I did not make, and do not have, such recordings.”…

…The president’s Twitter messages on Thursday left open the possibility that the conversations may have been taped without his knowledge. But they largely confirmed the suspicions of outsiders that Mr. Trump had been leveling a baseless threat at Mr. Comey on May 12, when he wrote, “James Comey better hope that there are no ‘tapes’ of our conversations before he starts leaking to the press!”

It took 41 days for President Trump to publicly deny the existence of taped conversations with former FBI Director James Comey. Trump quite literally could have done this at any time in the last 41 days.