Colorado is not new to peculiar campaign pitches. In 2016, U.S. Senate candidate Robert Blaha ran a graphic TV ad featuring a rectal exam, and Gov. John Hickenlooper once jumped out of an airplane to support a ballot initiative.

Despite the attention, the unusual announcement distracted from Kennedy’s advantage in the early stages of the race: She is the only Democrat candidate in the contest who has won a statewide election.

Former state treasurer Cary Kennedy, a Democrat, announced her run for governor from the driver’s seat of a moving car in a Facebook live video Monday, appearing to glance at a set of notes while operating the vehicle…

It’s unclear whether Kennedy was in a school zone at the time. Kennedy appeared to be driving on residential streets in her neighborhood and did slow to and check for other cars at an intersection while delivering prepared remarks.

9NEWS reviewed the video and noted that Kennedy appears to glance down at notes approximately 14 times before pulling into a driveway at approximately 1 minute and 40 seconds into the video…[w]hen asked whether this method of announcing her candidacy was safe, Kennedy campaign consultant Serena Woods defended the decision.

“Safety is always a priority and that’s why Cary was about 300 yards from her house,” Woods told 9NEWS in an email. “We had several people on the street monitoring traffic and she was driving slowly.”

The press responds, well, quizzically, after the announcement starts late and features some awkward moments:

I think we can all agree that was equal parts bizarre and entertaining.

Are those notes covering @CaryKennedy‘s dash? She appeared to glance at notes while driving in her #COgov announcement. #COpolitics #9NEWS pic.twitter.com/pRI6XE9694

Oof–sometimes the concept loses a bit in the execution! Call it a Facebook Live learning experience for all of us. 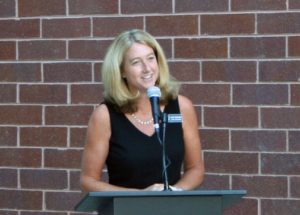 Tune in to former Colorado Treasurer Cary Kennedy’s Facebook page at 11:30AM this morning as she announces her campaign for governor of Colorado live–the Denver Post’s John Frank reporting on the event, which we’ll post here once available:

She is running on her experience as treasurer from 2006 to 2010 and later as chief financial officer in Denver, emphasizing her record and role in major education initiatives, such as Amendment 23 and the school-building program known as BEST.

“Colorado is a modern, innovative, forward-looking state and I have been a part of the leadership team of our state for the last decade,” Kennedy said in an interview with The Denver Post ahead of the announcement. “And I’m running to help continue this progress and lead the state, and make sure everyone benefits in our progress.”

We all love Colorado and living here. Colorado is innovative, forward thinking, solutions-oriented, and welcoming. We have built one of the fastest-growing economies in the nation. But, our work in Colorado just got a lot tougher. We lost our partner in Washington. We won’t let Washington take our state backwards. I am running for governor because I love Colorado. If we invest in our people, manage our money responsibly, and protect the Colorado we love, we can ensure that everyone here can benefit from our progress.

Kennedy is expected to run hard in this primary, and as we’ve said her first objective in the race is to narrow it to a two-person contest between herself and broadly-presumed frontrunner Ed Perlmutter. Watch for ex-Sen. Michael Johnston and Kennedy to spar for this coveted alternative slot, where despite Johnston’s initial fundraising success we would say on balance Kennedy has the upper hand.

We’ll update with coverage and video from the announcement.