(So much BS, so little time – Promoted by Colorado Pols) 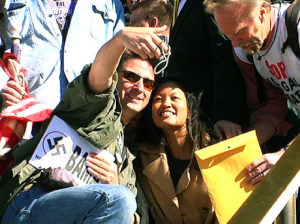 Former Colorado Secretary of State Scott Gessler identified nearly 5,000 noncitizens in Colorado who voted in the 2010 general election. Gessler’s office uncovered upwards of 12,000 noncitizens registered to vote. Liberal groups who oppose stronger election system protections attacked him for trying to verify citizenship status — because God forbid public officials sworn to uphold the rule of law actually do anything to enhance the integrity of our election system!

As the Grand Junction Sentinel’s Charles Ashby showed in 2013, Gessler did not identify 5,000 noncitizens who’d voted:

But since making those claims, Gessler’s office said it has been able to identify only 80 non-citizens statewide who were on the voter rolls over the past nine elections, representing 0.0008 percent of the more than 10 million ballots that have been cast in those general elections, and those ballots don’t include primary races or local elections that were held during that time.

After years of critics demanding that Gessler forward names of suspected non-citizens whom he said were on the voter rolls, his office referred a list of 155 suspected non- citizen voters in July to 15 district attorneys across the state, recommending prosecution and issuing a strongly worded statement saying the list was proof the state’s election system is “vulnerable.”

A check by The Daily Sentinel with those district attorneys over the past two weeks, however, revealed that none of the referrals led to criminal prosecutions, though some still are under investigation. The analysis also showed that although some of the non-citizen voters did cast ballots in at least one election going as far back as 2004, the preponderance of the other voters actually were citizens who legally had the right to vote.

Yet, despite Ashby’s readily-available piece, Malkin has written a column that’s basically premised on the 5,000-voting-noncitizens falsehood.

If I were Malkin’s editors at Creators Syndicate, I’d pull the piece. It can’t really be corrected adequately.