We were forwarded this ad running in Arvada and Westminster’s Senate District 19 in support of Sen. Laura “Waters” Woods, hard-right Republican up for early re-election this year after narrowly winning a special election in 2014. It would be difficult to come up with a campaign advertisement that was more blatantly false than this one: 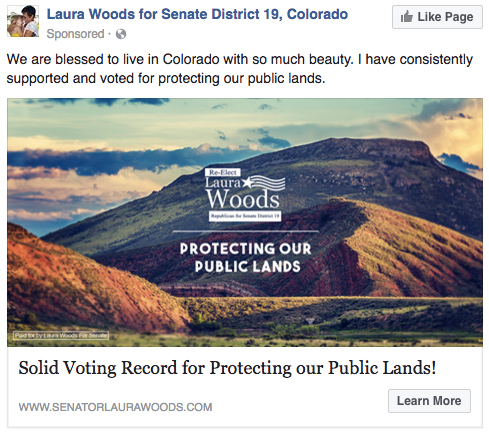 Notice how the ad has a little button that says “Learn More.” Clicking that button, or anywhere else on this Facebook ad takes you directly to the homepage of Sen. Woods’ campaign website.

The trouble is, there’s no mention of “public lands.” Not on the homepage. Not on her “issues” page. And according to Google: 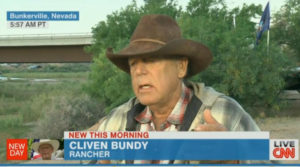 Now, the (presumably) targeted recipient of this ad was in fact a liberal Democrat in the district, which is itself noteworthy, although in this case a Democrat who knew that Sen. Woods can only be in the most cynical terms described as a “protector of public lands.” In fact, Conservation Colorado hit Woods earlier this year on her support for the decidedly fringy bill from Senate Republicans to take partial control of federal lands in Colorado, a la Cliven Bundy:

No is the pro-environment vote.

Status: Failed in House
Description: A cynical effort to seize control of public lands under the guise of responding to wildfire, this bill was cut and pasted from the Koch-funded think tank, American Legislative Exchange Council (ALEC), and was based on a Utah resolution. This is the third failed iteration of the “concurrent jurisdiction” bill in the Colorado legislature.

Conservation Colorado docked Woods in 2016 voted wrong on a whole slew of bills that would have at least an indirect effect on protecting public lands, including voting against the state’s work on the federal Clean Power Plan and weakening the state’s power to impose fines on polluters. In 2015, Woods voted the wrong way on every single Conservation Colorado-tracked bill, including a similar bill to assert state control Bundy-style over federal lands (Senate Bill 15-039). Woods’ aggregate “lifetime” score on the environment for the two terms she has served in the Colorado Senate is 9%.

Folks, this is much more than the usual campaign-trail fabrication. Woods says she has a solid voting record on public lands. But the reality is that she has consistently voted against legislation that would actually benefit public lands–while supporting bills that would functionally do the opposite. There’s really no overstating the magnitude of this falsehood. It’s like Gov. John Hickenlooper claiming to be anti-fracking, or Tom Tancredo coming out in favor of immigration reform–or for that matter, Woods claiming her last name was Waters. In a downballot state senate rate, an ad like this is clearly intended to disinform low-information voters. Apparent targeting at Democrats adds yet another layer to the deception.

Once again–like “Con Man” Cory Gardner, Mike Coffman, and so many other contemporary Republicans running from a far-right record–the chosen path to electoral survival is to pretend to be something they fundamentally are not.

Laura Woods, in her way, is the most egregious case yet.