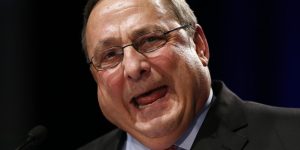 Maine Gov. Paul LePage may have a bit of an anger management problem.

It’s time to return, once again, to one of our longest-running features on this site: At Least They’re Not Your Legislator.

Today, we visit Maine, where Republican Gov. Paul LePage left a profanity-laced voicemail for a Democratic state senator and later challenged the man to a duel.

Yes, a duel. With pistols and stuff.

According to the Press Herald, Democratic State Rep. Drew Gattine was identified by local media as having called LePage racist, though Gattine denies doing so.

The governor took credit for leaving the voicemail in a later interview at his home with local media, and said he would like to challenge Gattine to a duel.

“When a snot-nosed little guy from Westbrook calls me a racist, now I’d like him to come up here because, tell you right now, I wish it were 1825,” LePage said, according to the Press Herald. “And we would have a duel, that’s how angry I am, and I would not put my gun in the air, I guarantee you, I would not be (Alexander) Hamilton. I would point it right between his eyes, because he is a snot-nosed little runt and he has not done a damn thing since he’s been in this Legislature to help move the state forward.”

Well, then. The moral of this story is obvious: The best way to prove that you are not a racist is to threaten to shoot another man in the head in a public duel.