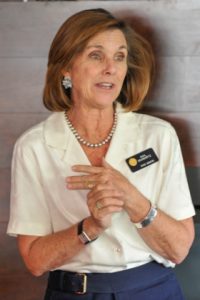 “We are finding he’s not someone who will step up and go back to Washington and talk about the issues that are important to our district, to our families, to our industries,” Schwartz said. “He is an individual who thinks his job is to privatize, and sell our public lands.

“And he denies we have a changing climate, and that means you are not part of the solution.”

Schwartz criticized Tipton, saying he votes for the oil and gas industry, which also writes the bills he introduces.

“Scott Tipton represents his largest donors, which are oil and gas. He doesn’t represent his communities,” she said.

At the same time,

Schwartz said she supports natural gas production and does not oppose fracking.

Responding to Schwartz today, Tipton spokesman Michael Fortney attacked Schwartz over her support for the Clean Air, Clean Jobs plan in 2010 that paved the way for the conversion of a number of coal-fired power plants along the Front Range to (somewhat) cleaner-burning natural gas:

“Her policies have directly led to thousands of her constituents being laid off and devastated entire communities that she was supposed to represent,” Fortney wrote by email on Wednesday. “The fact that she pursued her special interest agenda despite the life-shattering costs to her constituents gives us a clear indication of what kind of representative she will be for the 3rd Congressional District.”

The biggest problem with this line of attack is that the 2010 Clean Air, Clean Jobs deal was as bipartisan as it gets. Clean Air Clean Jobs’ lead Senate sponsor was GOP Sen. Josh Penry, and in the House the bill was co-sponsored by numerous Republicans like then-Rep. Frank McNulty. The coal industry didn’t love it, but the much larger natural gas industry in Colorado was all aboard. The more fundamental truth about coal, which of course no state senator can control, is a loss of market share due to cheap natural gas and a worldwide glut in coal production.

Also known as the “free market.”

This exchange illustrates the difficulty Tipton is going to have this election season painting Schwartz with the usual broad-brush Republican stereotypes about Democrats. Where Schwartz can claim that Tipton has sold out to Washington, D.C. special interests, the same can’t be said of Schwartz–who has a legislative record that’s moderate in all the right places to appeal to voters in Pueblo and on the Western Slope.