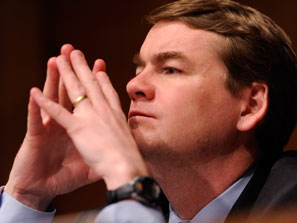 That’s 20 names, just off the top of our head, of Republicans who made some manner of noise about running for U.S. Senate in 2016. The names in bold are those who have either declared their intentions to run or have very recently gone public with the proposition. This is by no means an exhaustive list, but we were exhausted by the very thought of trying to look up every single Republican who was somehow connected to the U.S. Senate race.

The National Republican Senatorial Committee (NRSC) likes to say that Sen. Michael Bennett is the most endangered Democratic incumbent in 2016, pointing to generic heads-up matchups tested in polls throughout 2015. What these polls show, in a nutshell, is that Bennet could have a competitive re-election race if — and that’s a big “if” — he was facing a strong Republican challenger on the ballot in November (and if the election were held at the time each particular poll was actually conducted).

Here’s the rub: If Bennet is so seemingly beatable in 2016, then why are Republicans having so much trouble finding a candidate to rally behind?

First of all, any poll conducted more than year out from Election Day — in any race — is relatively useless. The average voter isn’t paying much attention to Michael Bennet just yet, and they certainly have little familiarity with the likes of Greg Lopez or Don Rozier.

The other piece of this story that Republicans fail to mention is that Bennet is considered the most endangered Democratic Senate incumbent in large part because he is the only Democratic incumbent running in a swing state in 2016. With Senate Minority Leader Harry Reid of Nevada choosing to retire rather than seek another term in office, Bennet is the list of endangered Democratic incumbents. It’s a useful fact if spun correctly, but the big Republican talking point on Bennet isn’t nearly as compelling as it sounds.

When you consider all of the rumors and news about the 2016 Senate race that floated out in 2015, one name stands above the rest: Tim Neville. The far-right conservative state senator started to dip his toe in the U.S. Senate field late last summer, and on Tuesday he formally kicked off his 2016 bid with a strong focus on social issues such as abortion and gun rights. Neville will have massive support from grassroots Republican activists, the Tea Party, anti-choice groups, and big gun lobbies such as the Rocky Mountain Gun Owners (RMGO) — all of which makes him nearly unbeatable in the June Republican Primary.

What makes Neville such an important figure in 2016? It is not clear that he could defeat Bennet in a General Election given his out-of-the-mainstream beliefs on abortion, gay marriage, and gun safety…but it is also difficult to see how Neville could possibly lose a Republican Primary to put his name on the ballot opposite Bennet. Any Republican candidate considering a 2016 Senate bid needs to first decide if they can beat Neville among the Republican base, and whether that campaign would need to avoid the caucus process out of fear that Neville would capture so many delegates that it would stop his challengers cold.

As of this writing, the NRSC thinks it has its best candidate in freshman state Rep. Jon Keyser. Washington Republicans are trying to push Keyser as their candidate because they like how he matches up against Bennet in a General Election. It is quite likely, however, that Keyser will never even make it to the General Election ballot because of Neville’s growing presence. In short, Washington Republicans want Colorado Republicans to get behind a Senate candidate who probably can’t win the GOP nomination in the first place.

Good luck with all that.