Sebelius talks to Coloradans about Barack’s plan for small businesses

From the Colorado for Obama blog: 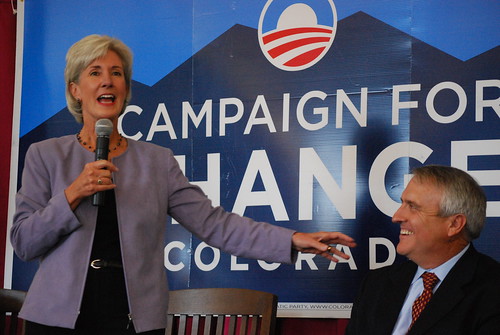 In Denver, Kathleen was joined by four other women, including Lieutenant Governor Barbara O’Brien for a panel discussion about small businesses. Speaking to a crowd of around 60 people in Denver, she said:

You don’t need to go any further than the local news station to know this country is teetering is on the brink of an economic crisis, the likes of which we haven’t seen since The Great Depression. For a lot of Colorado families and for a lot of families in our state, those economic woes were not a surprise because they’ve really been struggling with the cost of groceries and gas going up, jobs disappearing in this country; 660,000 jobs have been lost this year alone across America. 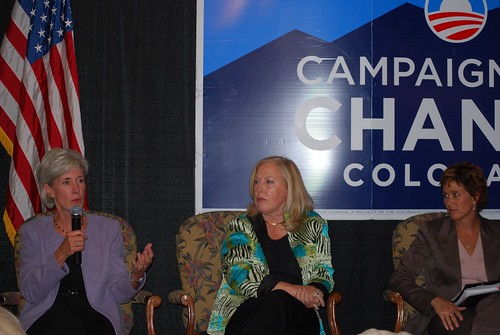 There are serious economic challenges and I think it has become abundantly clear that we cannot continue to do what we’ve been doing the past eight years and expect it to turn out differently. Albert Einstein said that awhile ago, he called it insanity. And that’s really what voters are faced with in this upcoming election.

Senator Obama has focused on the challenges facing those working families, feeling that it starts with a fair tax policy, that you have to shift to reward work once again and that working men and women should get a tax break. He has proposed a $500 per worker tax break. Ninety-five percent of the citizens of this state will get a tax break from the Obama administration just from that one element alone.

He thinks it’s important that small businesses be recognized as the engine of the economy that they are here in Colorado, in Kansas and across the country. Most workers work for companies employing fewer than 50 people. And those employers would no longer pay capitol gains tax as a way to incentivize additional investment in hiring new workers.

And that really is compared to the McCain tax policy which not only continues the Bush tax breaks, which at one point John McCain opposed — now he supports and supports continuing those tax breaks. Senator McCain has proposed the need to add an additional $300 billion in tax breaks for the wealthiest corporations and the wealthiest individuals in the country — starting with the big oil companies; they would get a big chunk off the top of that. No tax plan for working middle class Americans, most would not receive any relief at all, under the McCain tax plan.

One of the panelists, Leanna Clark, is a co-owner of a public relations firm that has been experiencing difficulties paying for their clients’ health insurance because of the problems in the economy. 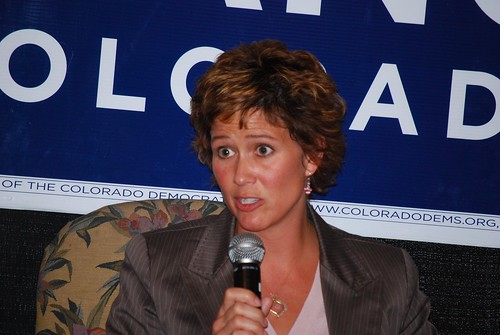 I love what I do. I love the business, the staff and the clients. But I hate a lot of what goes along with owning a small business — primary in my mind is the rising cost of health care. Over the past nine years at my company we have seen our health care costs increase 219%. And we are a company who philosophically believes in covering the health care costs for our employees and will continue to do so, but nobody can bear that kind of increase without making some kind of adjustments.

I believe that Barack Obama gets it and the plan that he is proposing makes a lot of sense. I asked a lot of questions, and I did a lot of research… Senator Obama’s direct tax credit to my company would cut what we’re spending annually on health care in half, and that is amazing.

Here are some more images from the Governor’s day in Colorado: