Get More Smarter on Friday (Sept. 11)

It’s hard to believe that it’s been almost 15 years already. It’s time to Get More Smarter with Colorado Pols. If you think we missed something important, please include the link in the comments below (here’s a good example).

► Republican efforts to scuttle President Obama’s foreign policy deal with Iran have officially failed, so apparently it’s time to put all of the stupid chips on the table. Republicans are now attacking Sen. Michael Bennet (D-Denver) over his support for the Iran deal with one of the more ridiculous arguments we’ve seen in some time:

An Associated Press report yesterday noted that embattled U.S. Sen. Michael Bennet was one of two Senators supporting the Iran deal whose family members were victims of the Holocaust. It’s almost as if we are expected to excuse Bennet his bad policy decision that would empower Iran, which has threatened to obliterate Israel, because his family experienced the Holocaust.

Uhhhhhh…we’d try to walk you through this logic if we could, but we can’t help you here. It’s not easy to be this dumb and so horribly insulting.

► CNN announced yesterday that they have decided on the 11 candidates who will get to participate in the Varsity version of the Republican Presidential Debate next week. CNN used some sort of formula based on combined national polling averages over the last two months, and somehow Carly Florina made it into the Final 11. According to CNN, famous rich person Donald Trump is now polling at 32%, making him the Republican frontrunner by a very large margin (Ben Carson is next at 19%, with Jeb! Bush a distant second at 9%).

As usual, we’ll be live-blogging the GOP Presidential debate(s) next Wednesday, Sept. 16.

► Congressman Mike Coffman (R-Aurora) stepped in quite the political turd when he signed onto the NRCC’s “Patriot Program” and promised to divulge his policy positions in exchange for top-tier incumbent support.

► Republicans were giddy about the potential of trotting out famous activist Erin Brockovitch to assist their cause of throwing stones at the EPA after the Gold King Mine spill in Silverton last month. It didn’t work.

► Former Interior Secretary and Colorado Attorney General Gale Norton pens an editorial about the sage-grouse for The Hill. Norton’s argument, in a nutshell, is that we should do more to protect those weird little birds before they make it to the Endangered Species List — but now that they are almost extinct, well, c’est la vie.

► Louisiana Gov. Bobby Jindal is apparently still seeking the Republican Presidential nomination. As he flails away looking for some sort of foothold among the two-dozen candidates, Jindal is making a fool of himself. From Politico:

Bobby Jindal pulled no punches against Donald Trump on Thursday, raining down a deluge of criticisms on the current Republican leader in the polls, calling him “a narcissist,” “an egomaniac,” “non-serious,” “substance-free,” “insecure,” “weak,” “shallow,” “unstable,” among other knocks…

“I’m putting aside my political mission today,” Jindal said, acknowledging his campaign’s struggles in the polls but noting that he is doing well in early states like Iowa, where the first caucus is in February.

Jindal also slammed fellow Republican candidates who are latching on to Trump’s rhetoric, saying that it makes no sense to “enable” his behavior.

“He is not a serious man,” Jindal said, remarking that it is time for Republicans and Americans to “fire” Trump. [Pols emphasis]

Yes, you read that correctly. Bobby Jindal just ripped Republicans for “enabling” Donald Trump, but only after he was done criticizing the Donald in order to get some media coverage for himself. (Not) well played.

► And here comes Ben Carson, trying to make headlines of his own by attacking Trump. If it weren’t for Trump, Republican Presidential candidates would have nothing to talk about.

► Okay, seriously, this is not that complicated: It doesn’t matter if you think you had a good reason to try to blackmail and/or extort State Party Chair Steve House. Extortion and blackmail is illegal — period.

► A Thursday event meant as a tribute to victims and families of 9/11 turned into a political debate. Of course it did. 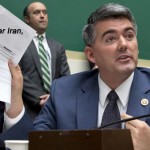 ► Republican Sen. Cory Gardner (R-Yuma) says it was “shameful” for Democrats to use a cloture vote in discussions over President Obama’s foreign policy deal with Iran. Consider the source, however: This is the same Cory Gardner who signed onto the infamous “Dear Iran” letter earlier this year.

► Our friends at “The Fix” wonder if it is time for supporters of Hillary Clinton to start panicking over her lackluster performance as the Democratic frontrunner for President in 2016. Really, it’s just time again for the media to start writing stories about whether or not Clinton should be panicking (Search Google news for “Hillary Clinton + panic” and you’ll see what we mean).

► State Treasurer Walker Stapleton is known to be eyeing a bid for the GOP nomination for Governor in 2018, but perhaps he should wait until then to actually start campaigning? As Charles Ashby reports for the Grand Junction Daily Sentinel:

Sounding more like a gubernatorial candidate than a state treasurer, Walker Stapleton had a lot to say about state government during a Grand Junction visit on Thursday.

Stapleton, who’s widely expected to vie for the GOP nomination for governor in 2018, discussed transportation funding, health care costs and the need for a statewide energy plan, issues that his current job have nothing to do with.

Your tax dollars at work…for Walker Stapleton to conduct a 64-county tour of Colorado that has nothing to do with his current elected office.

► You can add Colorado state Sen. Kevin Lundberg to the list of Republican politicians who support Kentucky county clerk Kim Davis over her refusal to follow the law.

► The Denver Broncos open the 2015 regular season on Sunday at home against the Baltimore Ravens. Oddsmakers have the Broncos listed as a 4-5 point favorite.

► Are there really still people out there who would voluntarily go hunting with former Vice President Dick Cheney?