from fivethirtyeight we have 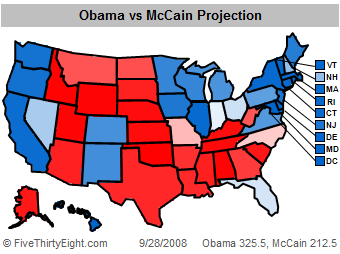 Here’s the long and short of it for John McCain: Barack Obama has as large a lead in the election as he’s held all year. But there is much less time left on the clock than there was during other Obama periods of strength, such as in February, mid-June or immediately following the Democratic convention. This is a very difficult combination of circumstances for him.

On the strength of a set of national tracking polls that each show Obama at or near his high-water mark all year, our model projects that he would win an election hold today by 4.2 points. It discounts this lead slightly to a projected margin of 3.3 points on November 4, as most races tend to tighten as we approach election day.

Here are the results from running their simulations. Not that Obama has good oddds of getting as many as 390 electoral votes. That’s a blow-out. 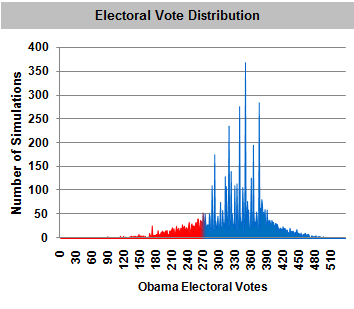 Colorado is now #7 in tipping point and #4 in ROI. I believe that is because we’re becoming a pretty solid Obama win. I put that not only to Obama selling himself and the Bush/McCain disaster, but that Schaffer and Musgrave are also hurting the Republican brand in this state.