No matter who Julie Williams is comparing to Nazis, it’s gross

Jeffco School Board member Julie Williams hopped on her Facebook page July 14 and shared a link titled, “How did the Nazis control education?”

“Controlling education was a way of taking over the minds of children from kindergarten to university,” reads the article, published by Yad Vesham The Holocaust Martyrs’ and Heroes’ Remembrance Authority. “Education was a major tool by which the Nazis’ racial policies were promoted and implemented. “In Nazi Germany, no one was allowed to think for themselves,” states the piece.

The post is shocking and confusing, which is in keeping with Williams behavior generally.

So I tried calling Williams so she could explain why she posted it, and to confirm, but I haven’t heard back yet.

Is Williams trying to say that the teachers, students, and others who’ve opposed the Jeffco School Board’s reforms are Nazis, because they’re getting involved and expressing their views about education policy?

Is Williams implying that the folks trying to remove her from the Jeffco School Board are Nazis, or at least acting like them, because they want different education policies than the ones Williams has backed?

Is Williams trying to say that the Common Core curriculum is backed by Nazis who want a Nazi-like takeover of America?

No matter what she’s trying to say by posting the Nazi article, it’s deep-sigh inappropriate and gross. You don’t accuse your opponents of acting like Nazis unless…they’re actually factually acting like Nazis. And obviously no none is doing so on either side of this debate. 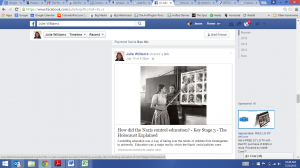