Yesterday, in the immediate aftermath of the tragic attacks on a military recruiting station and a separate reserve post near Chattanooga, Tennessee, Colorado Sen. Laura Waters Woods of Arvada swung into action on Facebook: 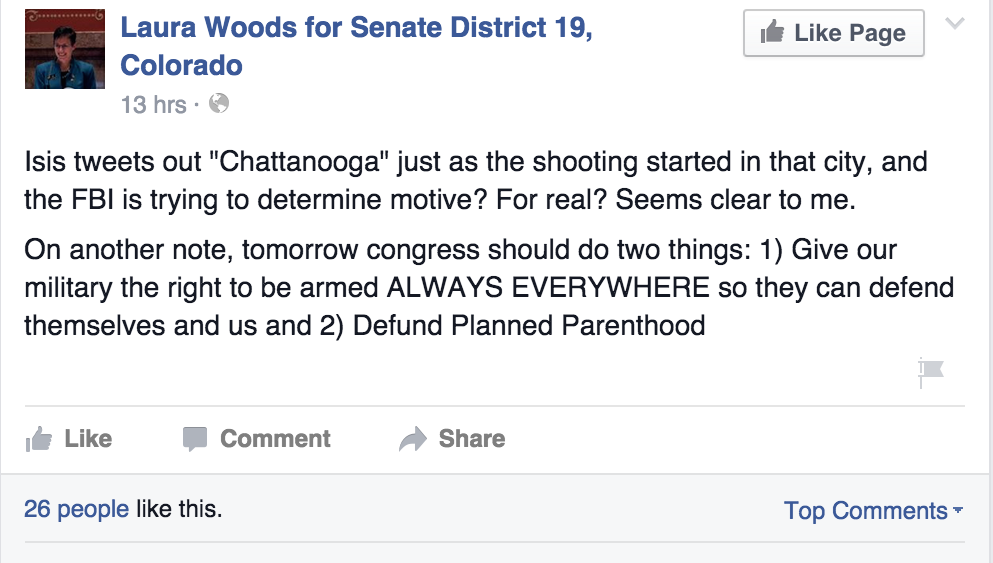 The biggest problem with this claim, says Media Matters for America, is that it isn’t true:

Four Marines were killed when a shooter fired on two military sites in Chattanooga, Tennessee. Fox News reported that the attacks may be connected to ISIS because an ISIS supporter purportedly discussed the shooting on Twitter before it happened. Fox host Sean Hannity repeated the false claim on his radio show.

In fact, the tweet Fox News referenced was posted well after the shooting had already occurred. Mashable editor Brian Ries first pointed out the discrepancy.

On Your World, Fox’s chief intelligence correspondent Catherine Herridge reported, “the last investigative thread I would mention at this point is that we’re taking a hard look at a Twitter account — an ISIS-linked Twitter account — that seemed to have foreknowledge of the shooting in Chattanooga. The tweet went out at 10:34 with the hashtag Chattanooga referring to American dogs and a likely shooting. This of course was about 15 minutes before the shooting took place.”

At the end of the Factor, Special Report anchor Bret Baier clarified the timing of the tweet, saying that “all indications now are that it came out after the attack.” When O’Reilly asked if that meant the ISIS tweet story was “a bogus situation,” Baier replied, “yeah.” [Pols emphasis]

So much for that! Of course, the investigation into the Chattanooga shootings is in no way complete, and we would also be wrong to speculate about the shooter’s motives and affiliations. It’s true Sen. Waters Woods will probably need look no further than the shooters Arabic name, but that’s just not the proof positive a Tweet from before the shootings would be. Better to wait for investigators to do their jobs.

As for allowing military members to be armed “ALWAYS EVERYWHERE” (emphasis hers)? Excepting authorized forces on prescribed law enforcement duties, there are a lot of good reasons to not do that. Has Waters Woods run that suggestion by her excitable “liberty movement” friends tracking the Jade Helm 2015 military training exercise? Something tells us they might not like the way that sounds.